Chapter 13 bankruptcy can be beneficial if you have a second mortgage, as the lien can be stripped and the debt erased if you meet certain criteria. 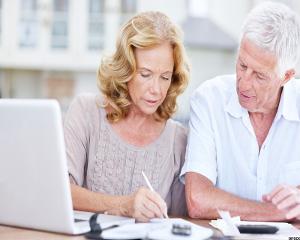 NEW YORK (TheStreet) — Most retirees would balk at the idea of filing for bankruptcy. But under certain conditions, it can be a viable way to protect retirement assets from creditors.

“Chapter 13 bankruptcy can be beneficial if you have a second mortgage, as the lien can be stripped and the debt erased if you meet certain criteria, which is mainly that your house is worth less than the balance owed on your first mortgage,” said Paul Kuzmickas, an attorney with Luftman, Heck & Associates in Cleveland.

While filing Chapter 7 bankruptcy requires only $10,000 of outstanding unsecured debt, such as credit card accounts, medical bills, taxes and court ordered money judgments, it’s filing Chapter 13 bankruptcy that makes the most sense for retirees struggling with income tax liens or second mortgage debt, and who want to ensure their assets are protected.

“It would strip off completely the second mortgage, third mortgage and any other home equity line of credit, which would then bring you much closer to building equity in your home in the future, and the amount of unsecured debt may not really matter if lien stripping is the goal,” Kuzmickas said. Aging boomers can easily qualify for bankruptcy despite their retirement savings, because filings are based on a six-month average of income.

“The senior citizen may be getting a lot in income from Social Security, but this is considered protected income, said Kuzmickas. “Therefore, if someone was looking at the six-month period of income for filing Chapter 7 bankruptcy, Social Security income would not count in that calculation.”

Every state has exemptions that protect assets from creditors, but a whole life insurance policy is only exempt when the beneficiary is either a spouse or child.

“Many retirees see bankruptcy as the best alternative for avoiding stress,” Kuzmickas said.

“A bankruptcy filing will remain on your credit reports for 10 years, and it will have an adverse impact on your scores the entire period of time,” said John Ulzheimer, a financial expert with CreditSesame.com.

It can take the full 10 years for your credit score to recover from bankruptcy, but that’s relative to your scores prior to filing. And for retirees who no longer require much credit, the benefit of bankruptcy far outweighs the social stigma.

“The main purpose of having good credit is to buy a home and many retirees already own one so the stigma of bankruptcy will have a far greater impact on young people who have not yet bought a home,” Kuzmickas said. “It’s becoming less of a stigma to file for bankruptcy now that there are better support networks for improving credit and helping people get back on their feet afterwards.”

However bankruptcy is not an easy way for retirees to dodge creditors.

“Creditors can petition to be excluded from the filing if they believe the debtor has the ability to pay them back, or they feel like the filing was strategic in nature to simply avoid paying back their debt,” Ulzheimer said. The complexities of bankruptcy can also get expensive fast.

“A lawyer’s hourly fee can start at $350 and it is not unusual for any kind of litigation to run into tens of thousands of dollars in legal fees before a client achieves what they are looking for,” said Stephen Preziosi, an attorney in Manhattan.

“Since retirees live on a limited income, I strongly suggest they weigh the costs against any potential outcome to determine whether it is worth the investment,” said Kuzmickas. “Be careful not to withhold information indicating the means to pay back creditors while undergoing the bankruptcy process. “It is never illegal or fraudulent to file bankruptcy, but it is illegal and fraudulent to lie on the bankruptcy petition and forms about the assets that you do or don’t have, the income that you do or don’t have or anything else along those lines.”