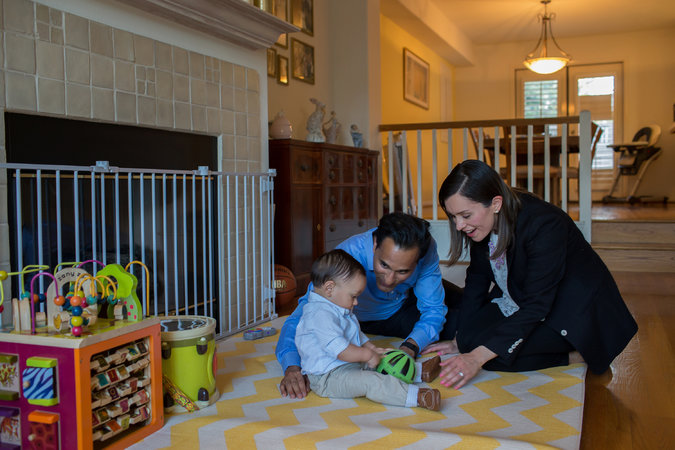 Rob and Natalia Austin with their 10-month-old son, Brady, at the townhouse they are renting in Pasadena, Calif.

Rob Austin and his wife, Natalia, have a 10-month-old son, healthy incomes and plenty of cash in the bank for a down payment on a house. But they are happily renting a townhouse in Pasadena, Calif., with no plans to buy for now, given the frothy prices in their area.

“As long as there is such a disconnect, where a couple like my wife and me have to put down a gargantuan down payment and still have a large monthly payment to get into a decent, and not necessarily nice, house, that is a game we don’t wish to play,” said Mr. Austin, a 39-year-old business manager at a biotechnology company. “When home price-to-income levels come back to a more normal level, when that happens, then we will be the first to jump in. If that never happens, that is O.K.”

More American households are renting, across all income levels and generations, for different reasons. But when homeownership is the centerpiece of the American dream, most of us have internalized certain ideals: Buying a home builds equity, putting you on the fast track to building wealth. Renting, by contrast, is essentially throwing money to the wind.

But with renters now accounting for 37 percent of all households, the highest level since the mid-1960s, according to the Joint Center for Housing Studies of Harvard University, more people may be renting for longer. Does that mean people who rent for extended periods, perhaps decades — even a lifetime — are forever at a disadvantage?

“Arguing about whether rent versus buy is a better financial decision is like debating active versus passive investment strategies, hedge funds versus mutual funds, Apple versus Google,” said Milo M. Benningfield, a financial planner in San Francisco. “Somebody’s going to be right in terms of higher returns in the future, but we can’t know in advance who that will be — and it will be tough to quantify how much risk was taken along the way.”

The arguments in favor of ownership are persuasive, particularly for people who expect to stay in place for at least five to seven years but probably more. A mortgage acts like a forced savings plan, even if you’re paying the bank hundreds of thousands of dollars in interest for the privilege of building equity. Call it the cost of enforcing a positive behavior.

Buying also generally protects consumers from rising rents, while traditional mortgage payments remain constant. Then, there is the fact that buyers are using borrowed money to purchase an asset that is likely to appreciate over a long period, though that can backfire as well (see housing market plunge, millions of underwater borrowers, circa 2008). Being able to call a place your own has a real, albeit intangible, value too.
Continue reading the main story
From Our Advertisers

How well any household will fare financially by buying or renting really depends on factors no one can predict. Other studies have found that renters who invest their down payment and any savings from renting as opposed to owning often come out ahead.

Either way, most financial professionals would caution against viewing a home purchase as an investment, particularly after factoring in the cost of maintenance, taxes, insurance and the high costs of buying and selling, though it’s difficult not to.

It may be hard for people living in bubbly markets to believe, but, over all, home prices in the United States have risen just 0.37 percent annualized, after inflation, for the last 126 years, according to calculations by Robert J. Shiller, an economist who received the Nobel in economic science in 2013 and wrote the book on speculative bubbles, “Irrational Exuberance.”

“Disregarding the special amenities that many people value in homeownership,” Professor Shiller said, “it would be hugely better invested in the stock market.”

And many people do accumulate substantial equity in their homes, which often becomes a cushy safety net in retirement. A study by the Harvard Joint Center found that, even after the housing crash, the median household who bought a home after 1999 still accrued significant amounts of wealth through 2013 (though whites gained more than African-Americans and Hispanics).

Is It Better to Rent or Buy – Interactive Tool

Christopher E. Herbert, managing director of Harvard’s Joint Center, said he believed the results could be tied, in large part, to behavioral incentives. “The motivated savings up front and the forced savings over time,” he said of accumulating a down payment and making mortgage payments.

There may also be something about many people who buy. As Mr. Benningfield pointed out, they may have other attributes that may contribute to their economic success.

Renting can still be financially advantageous under certain circumstances. Consider the work in 2012 by the academics Eli Beracha of Florida International University and Ken Johnson of Florida Atlantic University. They simulated a horse race between buyers and renters, and concluded that in many cases, renters came out ahead, at least during the eight-year stretches they studied.

Theoretical renters put their down payment in a portfolio that often consisted of more than 50 percent stocks (the professors created a portfolio that approximated the risk of owning a home), and continued to invest any savings from renting. But this assumes that there are savings from renting, which is not always the case, and that the renter is disciplined enough to actually set the money aside.

The authors’ point, however, is that people often blindly believe that buying is usually the smarter option. “Most of the public drive to buy is without looking under the hood,” Professor Johnson said.

Another study, from HelloWallet, a unit of Morningstar, came to similar conclusions in 2014 when comparing a hypothetical, moderate-income family that bought, with one that rented, in 20 major cities across the country. The study projects that median-income families, or those who earn about $50,000, will often end up with more net wealth if they rent versus own over the 10 years from 2013 to 2022.

But any number of variables can quickly shift that calculus, including the price of the home relative to the rent, whether the family is affluent enough to benefit from tax savings, and the time spent in the home.

“The longer you stay, the stronger the argument is for buying, all else equal,” said Aron Szapiro, who conducted the analysis. But he also contends that the tax advantages of homeownership are often oversold, particularly to moderate-income households.

If you’re trying to determine the right option, some guideposts may help. Mr. Szapiro, for example, found that in households with about $100,000 in earnings, net wealth typically rose more 10 years after buying a home than if they had rented — but only if the annual rent was 6 percent or more of the purchase price. So it would pay to buy a $600,000 home when rent in the area was about $3,000 a month or more. (In a couple of places, including New York and Washington, he found that it made sense to buy when the cost of renting was a bit lower relative to home prices.)

William Bernstein, an investment adviser who has written several books for do-it-yourself investors, offered another rule of thumb: Never pay more than 15 years’ fair rental value for any home, or 180 months of rent.

Why 15 years? By his calculations, someone paying more than 180 months of rent might potentially do better by investing in the market, after considering the costs of owning.

Perhaps easier to digest, Zillow advocates looking at how long it would take for buyers to break even, when compared with renters who invested their down payment of 20 percent and any savings in the stock market. Not surprisingly, buyers in places like Brooklyn, Washington and Los Angeles had to wait longer, at least four years.

Then there’s what you feel in the pit of your stomach. To Mr. Austin, house prices in the enclave where he lives in Los Angeles feel as if they are in a bubble, the housing downturn a faded memory. “Many people we know,” he added, “are tripping over themselves to buy right now.”

Correction: April 1, 2016
An earlier version of this article misstated, in one instance, the surname of a financial planner in San Francisco. He is Milo M. Benningfield, not Bennigfield.