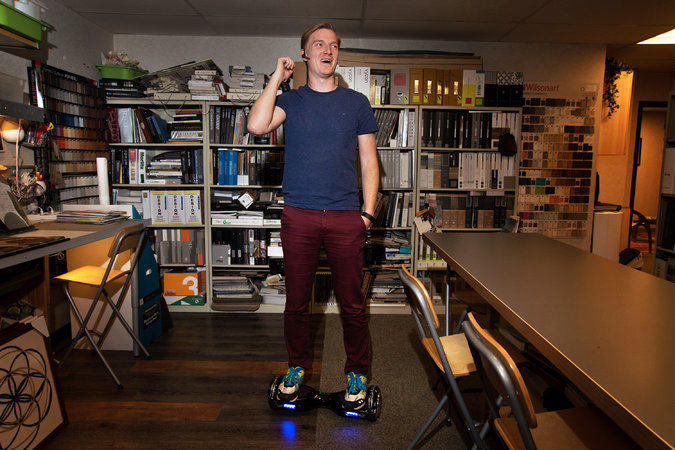 Peter Zimbicki, a senior associate at BillFixers who negotiates better deals for customers (while also riding a hoverboard). Credit Stacy Kranitz for The New York Times

BRENTWOOD, Tenn. — Cable companies and mobile phone service providers now offer so many deals, options, add-ons and doodads that the sheer number of potential pricing plans can boggle the mind. Chances are, you’re paying too much. Chances are, most everyone is.

So here in an office devoid of much sunlight, surrounded by Formica and paint samples that belong to the design firm that shares the space, two brothers, Ben and Julian Kurland, have set up a boiler room operation that would make Robin Hood proud. All day long, employees in headsets peel $100 bills out of the collective wallets of Comcast, Verizon, home-alarm services and the like and hand over the savings to consumers.

It works like this: Customers send in their most recent cable bill, say, and agree to allow the brothers’ company, BillFixers, to act as their agent. Then, BillFixers calls the company and asks for a better deal.

BillFixers claims a 94.9 percent success rate, and over many hours of watching, I saw its employees fail only once. In exchange for this service, customers hand over half of the next year’s savings, so that a $20-a-month reduction yields $120 for BillFixers.

You could learn a lot by aping the strategies of the brothers and their associates, and you will in just a bit.

But first, one not-so-small matter: When BillFixers calls, acting as its customers’ agents and armed with information from their bills, its representatives actually pretend to be their customers. They do not identify themselves as being from BillFixers, and companies on the other end of the calls never know the difference.

Is this legal? Even if it is, are the ethics even remotely defensible?

The laws seem to be murky. The Federal Trade Commission, the Federal Communications Commission and the Consumer Financial Protection Bureau declined to comment.

A spokesman for the Tennessee Division of Consumer Affairs also declined to comment. A spokeswoman for the state office where one of the brothers, Julian Kurland, a lawyer, had to register when he passed the bar, pointed me to the state’s rules for professional conduct for lawyers, which include prohibitions against engaging in “conduct involving dishonesty, fraud, deceit or misrepresentation.”

Does pretending to be your customers amount to any of those words, even when not acting as their lawyer? The state’s Board of Professional Responsibility for lawyers would have to determine that after a hearing and an investigation, which would presumably require a complaint. “The greatest publicity we could ever have is if Comcast sues us,” Julian Kurland said. “Maybe they’ll shut off our Internet.”

Neither Time Warner Cable nor Comcast was able to find any term of service that BillFixers was violating. “To protect our customers, we do verify certain pieces of information to make sure that their private information is not being used without their permission,” a Comcast spokeswoman, Jenni Moyer, said in an e-mailed statement. About half of BillFixers’ calls go to Comcast, and it reports no trouble with getting past Comcast’s screening.

Time Warner Cable, for its part, said it did not approve of BillFixer’s approach. “Legal or not, lying or misrepresenting yourself is rarely a good thing,” said Bobby Amirshahi, a company spokesman.

It’s far from the first choice of the Kurland brothers, either. When they started their company in 2014, they tried varieties of “We’re calling on behalf of” scripts, but companies would not work with them.

BillFixers’ terms and conditions, which most people probably don’t read, say that by signing up, you’re authoritizing the company to act “as an agent on your behalf.” Its FAQ page, which perhaps a few more people skim, says that “to save you hassle, we’ll just call using your name, but if you prefer a little hassle, you can call your provider and add us as official authorized users.”

Would everyone who reads this realize that the company intends to impersonate them? Probably not. The Kurland brothers note that no customer who has learned about their tactics has found them upsetting.

Still, at least one other similar company, BillCutterz, engages in three-way calls with its customers and their service providers. BillCutterz will also sometimes become an authorized user on customers’ accounts, according to its founder, Barry Gross, or it uses other measures that do not involve impersonation. Can it still make money? “Absolutely,” Mr. Gross said. “I’ve had friends get a lot richer than me by walking the gray line or into the dark, and that’s not my style.”

Whatever your feelings about BillFixers’ ethics, let me be clear about my own thoughts about the company, which I first read about on the website of the tech and consumer journalist Bob Sullivan. I do not endorse the way the company conducts itself when initiating calls. Its negotiating tactics, however, are clever.

Here’s what I picked up by listening in:

■ Start with the “Cancel My Service” option on your service provider’s phone tree. The representatives themselves echo this, saying things like “If you have trouble, just come to retention,” and “Seriously, call us back before your 12-month discount is up!” It’s a game, and they want you to come out and play.

■ But play nice. “The main thing is to be superfriendly,” Ben Kurland said. “The reps get yelled at all day, every day, and they hold a lot of power.” Also, his brother, Julian, noted that if you aren’t courteous, you never know when, say, your DVR might accidentally disappear from your service.

■ Come to the call prepared, since the representatives may want to know what prices you are seeing elsewhere. If you’re getting solicitations from competitors, keep them. If not, look up offers online.

■ If you have a television subscription of some sort, the companies will often offer HBO or other premium channels free for some period of time. Don’t like television? Ask for something else instead. When customers are thinking about canceling, companies are often willing to offer faster Internet speeds or other upgrades.

■ Ask for a new-customer discount if all else fails. Time Warner Cable gave one to a long-tenured customer on one call I listened to. Mr. Amirshahi, the company spokesman, said that calling an old customer “new” is not a lie since the service packages change constantly.

■ Customer service professionals often have the ability to hand out a one-time credit to aggrieved customers or just ones who are down on their luck. So ask for one, even if it’s on top of a newly lowered monthly bill. Hats off to AT&T Wireless, which gave $100 to a BillFixers customer after Peter Zimbicki, a senior associate at BillFixers who was pretending to be the customer, claimed that he’d had a lot of unexpected bills recently.

■ Be patient. One of Mr. Zimbicki’s go-to lines when representatives ask permission to put him on hold is this: “I have plenty of time.” This encourages cable or wireless employees to spend a few more minutes scraping together whatever discounts they can.

■ Ask whether any lower price requires a contract, commitment or any other word that sounds similar. BillFixers avoids new contracts; best not to be locked in, so you can negotiate again next year.

■ Once you have a firm offer, write down the details and call back. It isn’t real until you can get another representative to repeat the new price. BillFixers found this out the hard way in its early days when it billed its customers for its negotiating service, only to find that when the bills came, the discount was not as much as the company originally negotiated.

■ After a year, do all of this again and repeat ad nauseam. The absurdity of this is not lost on the Kurland brothers. They haven’t figured out how to get a robot to make these calls, so if their business gets much bigger, they will be creating one call center to call another call center all day long. “We’ve stumbled into a surreal corner of capitalism,” Ben Kurland said. “But it’s a deeply pleasant thing to be taking money from Comcast and their ilk and being able to provide jobs while doing it.”

When he puts it that way, it’s hard not to root for him just a little. But our financial lives would be so much easier — and way fewer people would be tempted to misrepresent themselves in pursuit of savings — if companies could simply offer the best deal to every customer all of the time.