You can get all the basics right and yet still break your budget. Researchers are beginning to discover why. 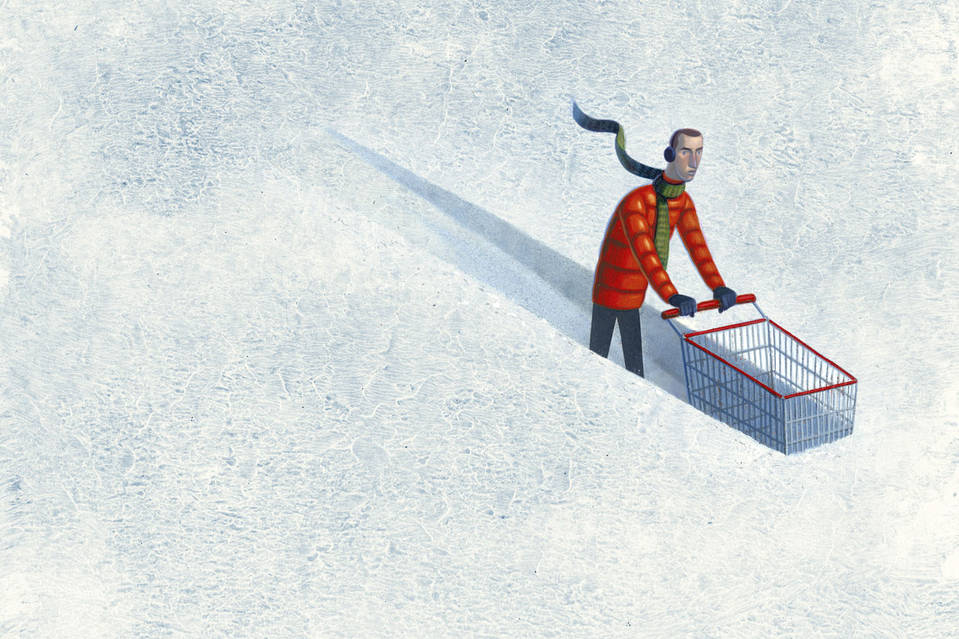 How can people get their spending under control?

Ask most people, and you’ll get the same answers. They should set budgets. Cut back expenses to better match incomes. And monitor their purchases to keep themselves on the straight and narrow.

Yet all too often when people try to take those steps, they fail. Before they know it, the bills pile up and they end up right back where they started.

Researchers are beginning to discover why you can break your budget despite getting all the basics right. WSJ’s Charlie Wells joins Tanya Rivero to discuss. Photo: Getty

Why? What drives us to spend too much even when we seem to make all the right moves?

Researchers are just beginning to understand—and the answers seem to lie in psychological impulses and blind spots that are tough for people to recognize, let alone overcome, in their day-to-day lives.

People’s mental wiring, for instance, is great at forecasting future income but terrible at imagining future expenses, leading us to set unrealistic budgets. How we think about our emotional resources also matters: If people imagine willpower as something that’s limited, they feel the need to reward themselves with things like impulse purchases when they accomplish a goal. And sometimes people unconsciously place such a high value on seeming financially responsible that they end up making choices that cost more money—like making big purchases on credit instead of tapping savings.

Here’s a look at what science is uncovering about our hidden impulses to spend and save, and how we can correct some of our worst mistakes.

One plank of a successful financial plan is an estimate of future income and expenses. The general goal, of course, is to spend no more than you bring in. But too often, the mind gets in the way.

The problem: For reasons researchers are still trying to understand, people are terrible at estimating outflows. According to a 2008 study in the journal Organizational Behavior and Human Decision Processes, humans use overly simplistic reasoning patterns that focus too much on inflows to estimate everything from how much water might be in a tub to the volume of greenhouse gases in the atmosphere.

And that has big implications for how they make financial plans, says John Lynch, director of the Center for Research on Consumer Financial Decision Making at the University of Colorado, Boulder, whose team researched the phenomenon in a forthcoming study in the Journal of Marketing Research.

When planning future finances, his study found, people think about income (inflows) but don’t really focus on rising expenses (outflows) so they end up thinking they can afford things they can’t. “This is how people end up buying a house or a car that they ultimately can’t afford,” says Mr. Lynch. “They estimate how much their incomes will rise and they know theoretically that they will have more expenses, things like insurance, the mortgage payments, gas, the repair costs. But they still ignore those costs when making the decision.”

Mr. Lynch uses the hypothetical example of a professional with an income of $48,000. She lives in a smaller city where a one-bedroom apartment costs $1,150 a month and dinner out for two costs $54. The professional is given the opportunity to earn $68,000 at a job in New York City. She realizes that it is more expensive to live in New York than the smaller city—an apartment will run $3,000 and dinners out $80. In spite of this, she feels that she is substantially better off financially in the new job, because she weighs her perception of her increased income far more substantially than her perception of her increased expenses. 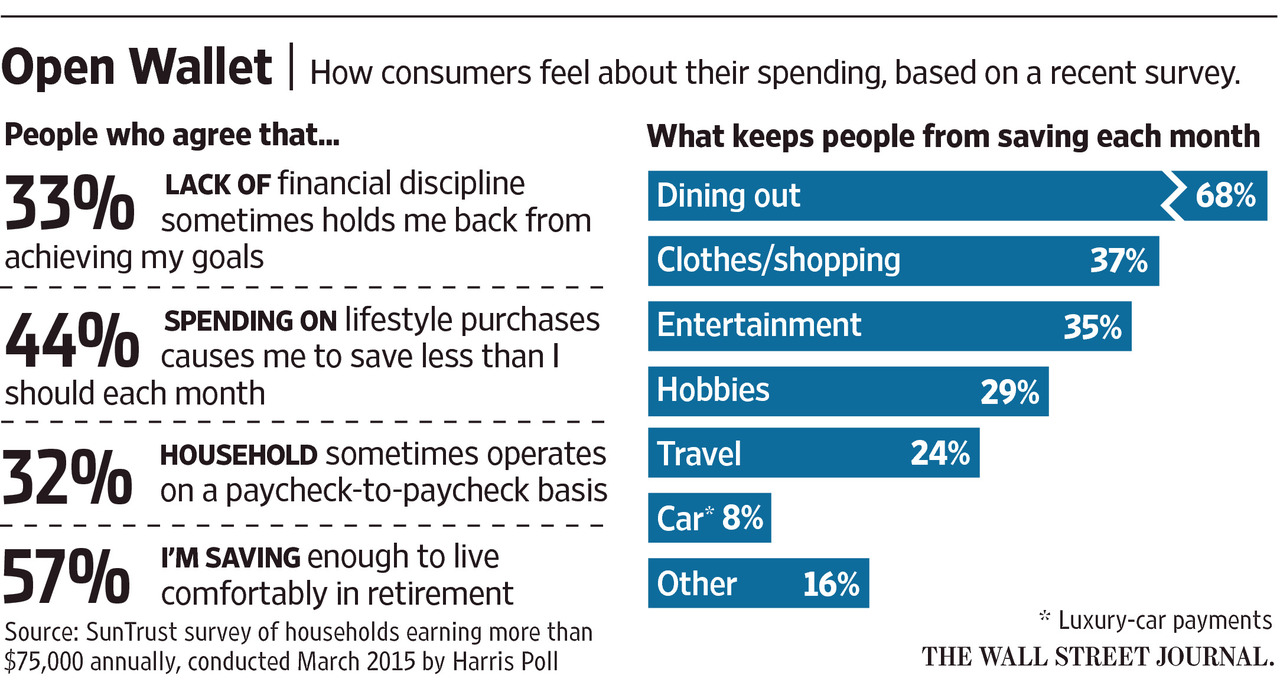 Mr. Lynch and his team are looking into behavioral solutions for this dilemma, but he believes a crucial component is to create an explicit budget. When people rely on subjective impressions of their finances and it looks possible that they can fit everything in, they spend. When they keep an explicit budget, it is much more likely that they will decide to cut out some desirable but unaffordable expense.

For many people, a financial plan involves focusing on one goal: keeping—and building—a certain amount of savings. It’s a worthwhile aim. But some recent studies suggest that it can backfire and lead people to spend more than they otherwise would.

Abigail Sussman, an assistant professor of marketing at the University of Chicago Booth School of Business, had a theory: Saving money makes people feel financially responsible. But that desire to feel responsible could be so strong that it might lead people to borrow money at expensive interest rates, to keep savings high and feel good about themselves.

To test her idea, Ms. Sussman and a co-author conducted online surveys. In one, she recruited 185 people to answer questions about how they would pay for a $1,000 emergency expense. They were asked whether they would spend money from savings or use a credit card at 10 different interest rates, from 0% to 30%.

In a forthcoming study in the Journal of Marketing Research, Ms. Sussman found that even though people were theoretically earning 1% interest from their savings, they were willing to borrow money at much higher rates to keep their savings at a certain level.

“I’m not at all saying people shouldn’t save,” says Ms. Sussman. “But even people with an appropriate liquidity cushion want to keep more money in their savings accounts because it makes them feel responsible, even though it might lead them to do these behaviors that are potentially economically costly.”

Ms. Sussman says consumers should focus on the big picture and not view every decision through the single lens of preserving their savings. For instance, people who have a solid cash safety net should come up with a financial plan that includes spending extra savings to avoid debt. The plan should include provisions that still make the person feel financially responsible, even if they spend savings, such as replenishing those savings at each pay period. As simple as that seems, she says, it’s surprising how many people don’t follow it.

“The lesson here is to be a little bit thoughtful about your spending, where the money is coming from and the costs associated with that, rather than taking a rule given to you and using it for everything,” she says.

Stop spending to reward yourself

Many people go awry in their spending because of the way they view willpower—and what they feel they deserve for using it.

Studies have found that some people imagine willpower as something that is a limited resource and is fairly easily depleted, while others see it as something abundant that doesn’t run out. That leads to very different behavior in times of stress. People who think willpower is limited think they deserve to reward themselves for showing some willpower, while people who think it’s unlimited think no reward is needed or deserved. 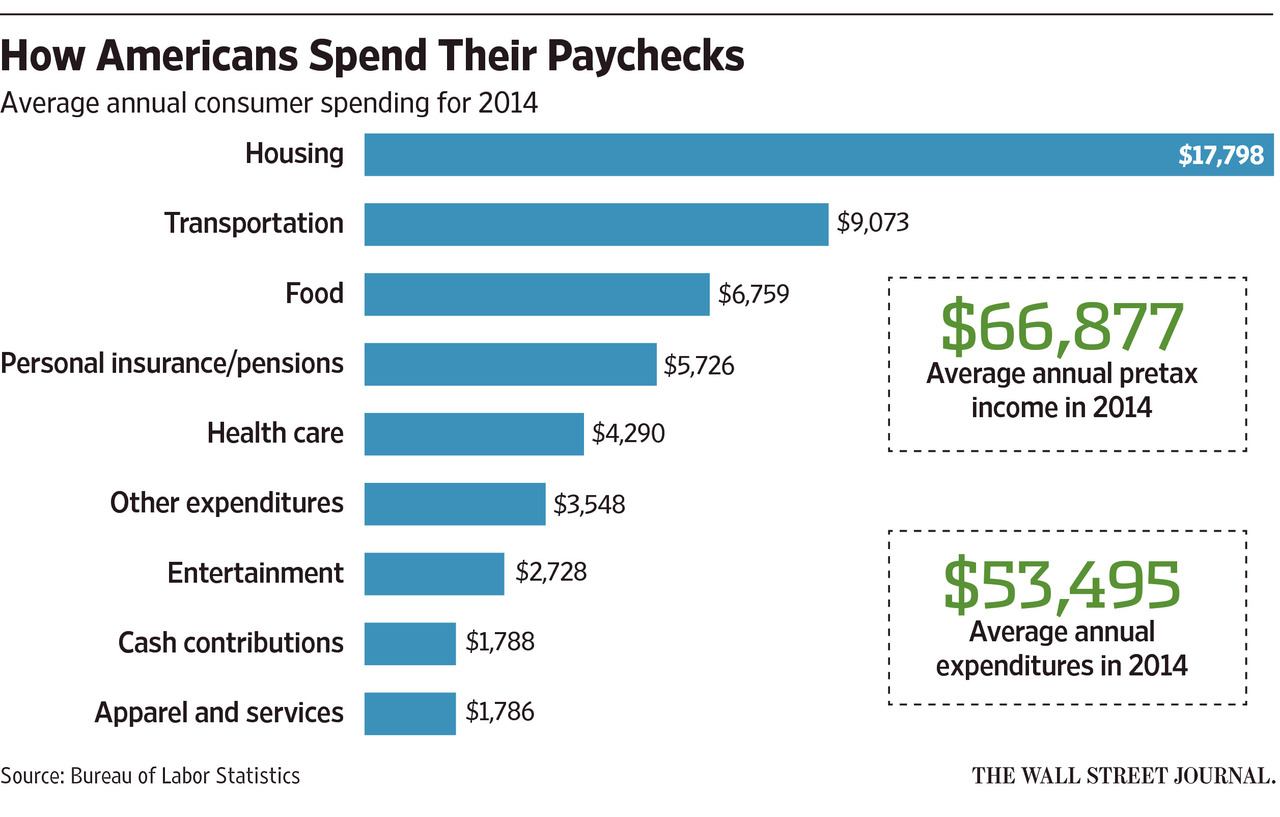 For people in the former category—those who think willpower is limited—the rewards they give themselves are often unhealthy, like eating junk food, procrastination and overspending. That’s according to a 2015 study by a team of Stanford University and University of Zurich researchers published in the Journal of Personality and Social Psychology.

Changing how a person thinks about the availability of willpower would probably require a long-term intervention, says Veronika Job of the University of Zurich, a co-author of the study. In the short term, she recommends that people with these habits find ways to rest or reward themselves after hard work that don’t include spending or other unproductive behaviors—such as engaging in sports, going out into nature or meditating, she says.

Further, she suggests that people who tend to want to reward themselves after stress should try to avoid putting themselves in situations where they could be tempted to lose control. “If you know you’ve had a bad day and you’re prone to go shopping to reward yourself, you might want to avoid heading in the direction of the stores on that day,” she says.

Mind your mood when spending

Other research has begun to explore the tangled relationship between moods and money habits. When people are sad, their habits are worse. When they are happy, their habits are better. Even if money can’t buy happiness, it seems that happiness can buy money.

According to a 2012 study of 4,500 Dutch consumers in the Journal of Economic Psychology, unhappy people save less, spend more and have a higher propensity to consume. They have less control over their expenses and envision higher inflation in the future.

Happy people exhibit the opposite characteristics. They are more future-oriented and pursue goals that will serve them better in the long run. They believe there will be less inflation over time, and so save more money to benefit from cheaper prices in the long run and spend less in the immediate term.

“Especially while making decisions about consumption and savings, this study tells us that our psychological conditions really matter in terms of making good or bad choices,” says Cahit Guven, a senior lecturer in economics at Deakin University in Australia who conducted the research.

Mr. Guven suggests that people wait until they are in better moods to make financial decisions. It might seem hard to know if you have the perspective to make the right decision, but Mr. Guven says that in study after study, individuals have shown that they are actually good judges of their personal states when asked to report their well being.

He also recommends that people give their financial plans another look if they seem to be focused too much on the short term and get perspective by involving more than one person in household financial planning.

Finally, people display a blind spot when it comes to their homes. Many people spend more when the value of their assets—particularly their property—goes up, even though in reality those assets often won’t add to their spending power in the future. In fact, for each $1 increase in the market value of a home, certain households increased their consumption by six cents to 18 cents, according to a 2013 study in the Review of Economics and Statistics. 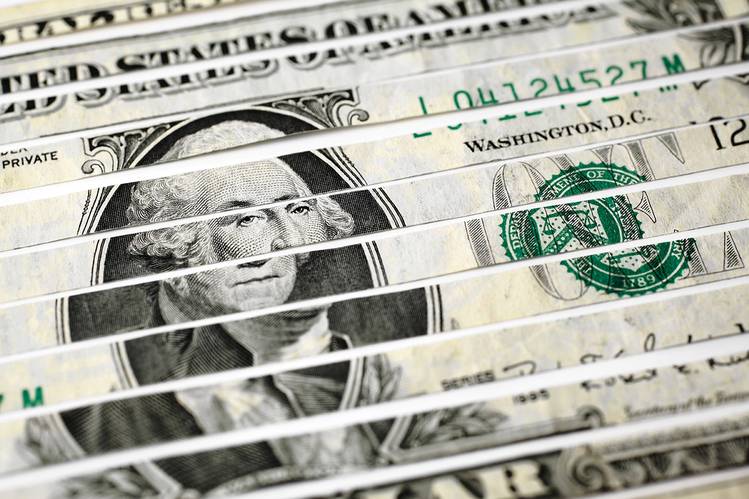 Daniel Cooper, a senior economist at the Federal Reserve Bank of Boston who wrote the 2013 study, measured the relationship between consumption and housing wealth, focusing on how fluctuations in housing wealth impact households’ borrowing power. He found the spending increase occurred when higher housing prices allowed people who needed more credit to borrow more against the value of their homes.

“People get really excited when their house prices go up. They feel wealthier, like they have all this extra money,” he says. “But you have to step back and say, ‘Is this really the case?’ ”

Mr. Cooper explains that to realize actual wealth from an increase in a home’s value, a person would have to sell the house. A comparable house in the same market would likely cost just as much. So a person wouldn’t have that much extra cash available to spend, unless he or she downsized significantly.

In general, Mr. Cooper says that people need to think about their homes not as an investment, not even as a regular financial asset, but as a place to live. What’s more, people shouldn’t think about a home as a tool for borrowing more money. “If you max out your home-equity line of credit and then housing prices change, chances are you will find yourself financially constrained,” he says.

Written by Charlie Wells. Mr. Wells is a news editor for The Wall Street Journal in London. He can be reached at charlie.wells@wsj.com.