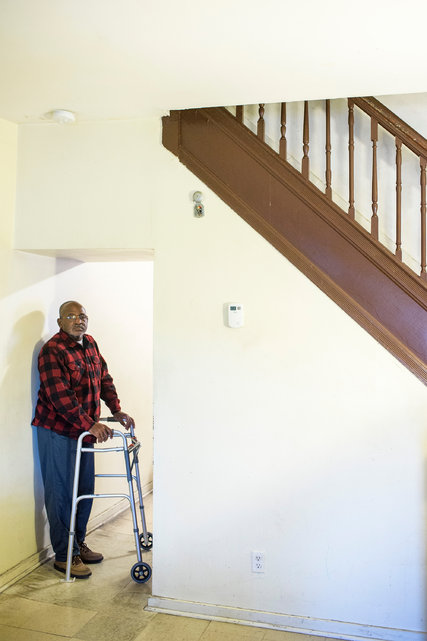 Clifford Cain Jr., a retired electrician in Baltimore, was used to living on a tight budget, carefully apportioning his Social Security and pension benefits to cover his rent and medication for multiple sclerosis.

So Mr. Cain was puzzled when he suddenly could not make ends meet. Months later, he discovered why: A debt collector had garnished his bank account after suing him for about $4,500 the company said he owed on an old debt.

Mr. Cain said he never knew the lawsuit had been brought against him until the money was gone. Neither did other Baltimore residents who were among the hundreds of people sued by the collector, Midland Funding, a unit of the Encore Capital Group, in Maryland State Court. Some of them said they did not even owe any money, or their debt had long expired and was not legally collectible, according to a review of court records.

In any case, the Encore subsidiary was not licensed to collect debt in Maryland.

Yet when Mr. Cain brought a class action in 2013 against Midland Funding, the company successfully fought to have the lawsuit dismissed.

If the plaintiffs wanted to try to recover their money, they would have to do so in private arbitration. And because class actions are banned in arbitration, Mr. Cain and the others would have to fight the unit of Encore — one of the largest debt buyers in the country with vast legal resources — one by one.

“I can’t for the life of me understand how this is allowed to happen,” said Mr. Cain, who could not afford to pursue his case alone in arbitration.

The use of arbitration by the companies is the latest frontier in a legal strategy orchestrated by corporations in recent years. By inserting arbitration clauses into the fine print of consumer contracts, they have found a way to block access to the courts and ban class-action lawsuits, the only realistic way to bring a case against a deep-pocketed corporation.

Their strategy traces to a pair of Supreme Court decisions in 2011 and 2013 that enshrined the use of class-action bans in arbitration clauses.

The result, The New York Times found in an investigation last month, is that banks, car dealers, online retailers, cellphone service providers and scores of other companies have insulated themselves from challenges to illegal or deceptive business practices. Once a class action was dismantled, court and arbitration records showed, few if any of the individual plaintiffs pursued arbitration.

A New York Times study of the increasing use of arbitration clauses in contracts, which has effectively forced millions of people to sign away their right to go to court.
OPEN Graphic

In the last few years, debt collectors have pushed the parameters of that legal strategy into audacious new territory. Perhaps more than any other industry, debt collectors use the courts while invoking arbitration to deny court access to others. The companies file lawsuits seeking to force borrowers to pay debts. Because borrowers seldom show up to challenge the lawsuits, the collectors win almost every case, transforming debts that banks had given up on into big profits.

Other industries have tested the boundaries of arbitration in different ways. Auto dealers, for example, successfully lobbied Congress in 2000 to make sure that they could go to court when they had a dispute with their manufacturers. Today, though, dealers regularly require their customers to go to arbitration, while they can still sue manufacturers in court.

In the case of debt collectors, the arbitration clauses that companies are invoking are often in contracts that borrowers presumably agreed to with their original lenders — not with the debt collector. Additionally, debt collectors often cannot produce a copy of the agreement in court, according to records and interviews.

Consumer advocates argue it is not fair for debt collectors to enforce an arbitration agreement a consumer signed with a different company. Debt collectors counter that they are buying loan contracts, and the terms come with them.

Because the tactic is still in its early stages, there is no data tracking the cases. But The Times, examining thousands of state and federal court records, and interviewing hundreds of lawyers, plaintiffs, industry consultants and judges, found that debt collection companies have already used the strategy to great success.

In the cases that The Times examined, judges routinely sided with debt collectors on forcing the disputes into arbitration.

In Mr. Cain’s case, Midland Funding, the unit of Encore Capital, persevered despite originally lacking a copy of a Citibank arbitration agreement they said he signed in 2003. Instead, the debt collector presented as evidence a Citibank contract that one of Encore’s lawyers signed when he opened an account.

In Mississippi, Midland Funding won a court judgment to compel Wanda Thompson to pay more than $4,700 on a debt that was too old to be collected under state law, court records show.

When Ms. Thompson filed a class-action suit on behalf of other state residents, Encore invoked an arbitration clause to have the lawsuit dismissed. Ms. Thompson’s lawyers argued that the company had clearly chosen court over arbitration when it sued her to collect the debt. By going to court, the lawyers said, Encore waived its right to compel arbitration.

Unpersuaded, the judge ruled that Encore’s lawsuit to collect the debt was separate from Ms. Thompson’s case accusing the company of violating the law.

“It’s beyond hypocritical that the companies can use arbitration to avoid being held accountable in court, all the while using the courts to collect from consumers,” said Peter A. Holland, a lawyer who ran the Consumer Protection Clinic at the University of Maryland’s law school.

In a statement, Greg Call, Encore’s general counsel, said the company “has a longstanding commitment to operating ethically and treating consumers with respect.” Responding to the specific cases, he said the judges “carefully reviewed the parties’ evidence regarding whether the creditor and consumer had agreed to arbitrate and whether arbitration was the appropriate forum to resolve a dispute, and followed federal law and Supreme Court direction when ordering the matter to arbitration.”

In the consumer credit ecosystem, debt collectors are at the bottom rung. They buy huge bundles of delinquent debt from banks for pennies on the dollar.

The Federal Trade Commission, which examined 5,000 portfolios of debt purchased by the nation’s largest debt buyers, found that only 12 percent included documentation.

The debt collectors do not just use the courts to collect on the money, they flood them. In 2014, the industry filed roughly 20,000 lawsuits in Maryland and more than 67,000 in New York, according to court records.

Philip S. Straniere, a civil court judge in Staten Island, called some of the cases that crossed his desk “garbage.” Some debt collectors, Judge Straniere said, have sought to recoup payments from the wrong person.

Little of that matters, because many defendants do not show up to defend themselves. Some never read nondescript legal notices informing them of the lawsuits. Others who do are too intimidated or ill-equipped to go to court.

Once it begins, the litigation machine is virtually impossible to stop. When defendants are absent, judges have little choice but to find in favor of the debt collectors, according to interviews. Industry consultants estimated that collectors win 95 percent of the lawsuits.

Their practices have attracted state and federal scrutiny. In September, the Consumer Financial Protection Bureau fined Encore and a second debt collector, the PRA Group, for trying “to collect on debts they should have known were inaccurate.”

Mr. Call, Encore’s general counsel, said that litigation was “always a last resort” and was used only to collect on less than 5 percent of the debts the company owned. He added that, like the C.F.P.B., Encore wanted “to ensure that consumers are treated fairly.” A spokeswoman for the PRA Group declined to comment.

But even when borrowers bring class-action lawsuits over practices that regulators have determined to be illegal, the cases are being thrown out because of arbitration clauses, court records show. In Maryland, Midland Funding reached a $1.2 million settlement with the state’s financial regulator, which found that the company had “engaged in unlicensed collection,” the very issue that Mr. Cain could not bring to court. In Kansas, borrowers did not fare any better when they sued Midland Funding, accusing the company of not being properly licensed. Mr. Call said Midland was “appropriately licensed.” A judge granted the company’s motion to compel arbitration.

Once their class actions were dismissed, few plaintiffs pursued arbitration, data analyzed by The Times shows. Encore and its subsidiaries faced 38 arbitration cases from 2010 to 2015 and the PRA Group faced 15, the data shows.

Fred W. Schwinn, a consumer lawyer in San Jose, Calif., thought he had a winner when he brought a class action on behalf of a woman who said she had been improperly sued to collect an old credit card debt. Predictably, Mr. Schwinn said, the debt collector, a unit of SquareTwo Financial, asked the judge to order the case into arbitration.

But Mr. Schwinn discovered an agreement that the SquareTwo unit had entered with the credit card company from which it bought his client’s debt. The agreement stated that the debt collector “shall not use arbitration for collection of debt.”

A judge in the case still ruled in the debt collector’s favor, saying the agreement did not prevent the SquareTwo unit from using arbitration clauses when facing lawsuits from consumers, as opposed to when it was trying to collect those consumers’ debts.

Such decisions are leading lawyers to believe they may have found, in the words of one law firm, the “silver bullet” for killing off legal challenges. In an industry podcast, two lawyers discussed the benefits of using arbitration to quash consumers’ lawsuits. The tactic, they said, is emerging at an opportune time, given that debt collectors are being sued for violating federal law.

The beauty of the clauses, the lawyers said, is that often the lawsuit “simply goes away.”