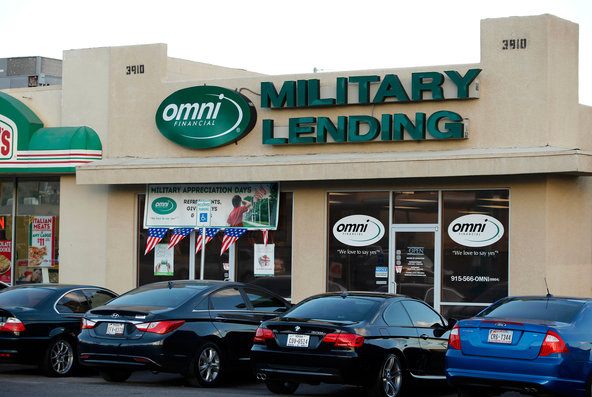 Ivan Pierre Aguirre for The New York Times A business offering short-term loans near Fort Bliss in El Paso, Tex. Interest rates on such loans can reach as much as 80 percent.

Month after month, the money goes to cover payments on loans with annual interest rates of nearly 40 percent. The monthly scramble — the scrimping, saving and going without — is a familiar one to her. More than a decade ago, she received her first payday loan to pay for moving expenses while her husband, a staff sergeant in the Marines, was deployed in Iraq.

Alarmed that payday lenders were preying on military members, Congress in 2006 passed a law intended to shield servicemen and women from the loans tied to a borrower’s next paycheck, which come with double-digit interest rates and can plunge customers into debt. But the law failed to help Ms. Kelly, 30, this year.

Nearly seven years since the Military Lending Act came into effect, government authorities say the law has gaps that threaten to leave hundreds of thousands of service members across the country vulnerable to potentially predatory loans — from credit pitched by retailers to pay for electronics or furniture, to auto-title loans to payday-style loans. The law, the authorities say, has not kept pace with high-interest lenders that focus on servicemen and women, both online and near bases.

“Somebody has to start caring,” said Ms. Kelly, who took out another payday loan with double-digit interest rates when her car broke down in 2005 and a couple more loans this summer to cover her existing payments. “I’m worried about the sailors who are coming up behind me.”

The short-term loans not covered under the law’s interest rate cap of 36 percent include loans for more than $2,000, loans that last for more than 91 days and auto-title loans with terms longer than 181 days.

While it is difficult to determine how many members of the military are struggling with loans not covered by the law, interviews with military charities in five states and more than two dozen service members — many of whom declined to be named for fear that disclosing their identity would cost them their security clearances — indicate that the problem is spreading.

Shouldering the loans can catapult service members into foreclosure and imperil their jobs, as the military considers high personal indebtedness a threat to national security. The concern is that service members overwhelmed by debt might be more likely to accept financial inducements to commit espionage.

The Military Lending Act followed a series of articles in The New York Times in 2004 that documented problems in the sale of life insurance and other financial products. Those problems were also highlighted in congressional hearings and reports from the Government Accountability Office. The 2006 law was meant to stamp out the most dangerous products while ensuring that service members did not lose access to credit entirely.

“The law did wonders for the products that it covered, but there are simply many products that it doesn’t cover,” Holly K. Petraeus, the assistant director for service member affairs at the Consumer Financial Protection Bureau, said in an interview.

Short-term lenders argue that when used prudently, their loans can be a valuable tool for customers who might not otherwise have access to traditional banking services.

Yet government agencies are now scrutinizing some of these financial products, including installment loans, which have longer repayment periods — six to 36 months — than a typical payday loan.

There is a growing momentum in Washington to act. On Wednesday, the Senate Commerce Committee convened a hearing on abusive military lending. And the Defense Department has begun soliciting public feedback on whether the protections of the Military Lending Act should be expanded to include other types of loans.

“Federal protections are still insufficient” to protect the military, said Senator Jay Rockefeller, the West Virginia Democrat who is chairman of the Commerce Committee.

Interest rates on the loans offered by companies like Just Military Loans and Military Financial, can exceed 80 percent, according to an analysis by the Consumer Federation of America.

Pioneer Financial and Omni Military Loans, which dominated the military business before the passage of the 2006 law, now offer products that fall into its gaps. These two companies and others pitch loans for more than $2,000 — the amount of money covered under the law — or simply make loans beyond the 91-day period covered, according to a review by The Times of more than three dozen loan contracts held by the service members interviewed.

Omni and Military Financial did not respond to requests for comment.

Joe Freeman, Pioneer’s president, said in a statement that none of its loans had interest rates above 36 percent.

For short-term lenders, the military, made up of many young, financially inexperienced people, is an attractive customer base, especially because they have reliable paychecks, a rarity in lean economic times. And a fixture of military life makes it even easier for lenders to collect.

“We have very good success because they are able to pay us back through their paycheck in the form of the allotment,” said Rick Rosen, who was a manager at a Pioneer Services branch that was situated near the main entrance to Fort Bliss, Tex., one of the nation’s largest bases. During an interview earlier this year outside the branch, which has since been closed, Mr. Rosen emphasized that soldiers could choose whether to pay through allotment.

Service members say, though, that they had no choice. Nikea Dawkins, a 23-year-old sergeant in the Army, said she had to agree to pay her $1,500 loan from Pioneer through allotment. “There was no way that they would give the loan to me unless I agreed,” she said.

Some lenders, military members say, use threats to ensure that they are repaid. The service members said they were told that if they fell behind, the lenders would go to their commanding officers.

The warning can be enough to induce military members to borrow more money to cover their existing loans. Since taking out her first loan with Pioneer in 2002, for example, Ms. Kelly said she and her husband had together taken out four more loans, from lenders including Military Financial and Patriot Loans.

Such official-sounding company names — along with advertisements featuring men and women in uniform — can lull service members into believing that the loans are friendlier for the military, according to Dave Faraldo, the director the Navy-Marine Corps Relief Society office in Jacksonville, Fla.

It’s a simple mistake to make.

Others try to persuade military members to pitch the loans to their friends, offering a $25 referral fee or a Starbucks gift card, according to service members. Some lenders have thrown loan parties near bases, drawing people with the promise of free Buffalo wings, service members say.

The sheer availability of the loans can make it tough to abstain. Ana Hernandez, who oversees the so-called financial readiness program at Fort Bliss, says that soldiers on the base readily take out loans to buy things like electronic goods. “They are loans for wants, not for necessities at all,” she said.