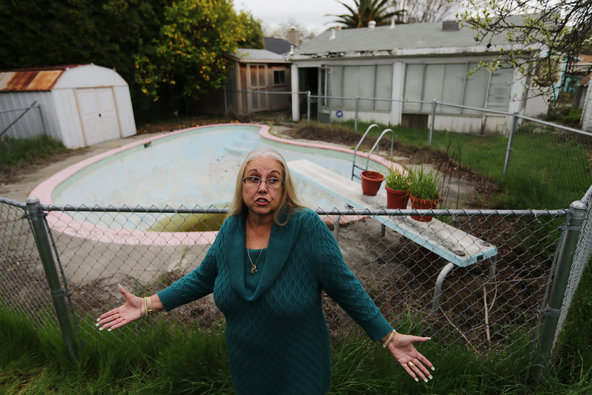 The only solace for Isabel Santos as she spends her evenings huddled over stacks of yellowed foreclosure notices is that her parents are not alive to watch their ranch-style house in Pleasant Hill, Calif., slipping away.

Ms. Santos, 61, along with a growing number of baby boomers, is confronting a bitter inheritance: The same loans that were supposed to help their elderly parents stay in their houses are now pushing their children out. “My dad had nothing when he came here from Cuba and worked so hard to buy this house,” Ms. Santos said, her voice quivering.

Similar scenes are being played out throughout an aging America, where the children of elderly borrowers are learning that their parents’ reverse mortgages are now threatening their own inheritances. Reverse mortgages, which allow homeowners 62 and older to borrow money against the value of their homes that need not be paid back until they move out or die, have long posed pitfalls for older borrowers.

Now many like Ms. Santos are discovering that reverse mortgages can also come up with a harsh sting for their heirs.

Under federal rules, survivors are supposed to be offered the option to settle the loan for a percentage of the full amount. Instead, reverse mortgage companies are increasingly threatening to foreclose unless heirs pay the mortgages in full, according to interviews with more than four dozen housing counselors, state regulators and 25 families whose elderly parents took out reverse mortgages.

Some lenders are moving to foreclose just weeks after the borrower dies, many families say. The complaints are echoed by borrowers across the country, according to a review of federal and state court lawsuits against reverse mortgage lenders.

Others say that they don’t get that far. Soon after their parents die, the heirs say they are plunged into a bureaucratic maze as they try to get lenders to provide them with details about how to keep their family homes. 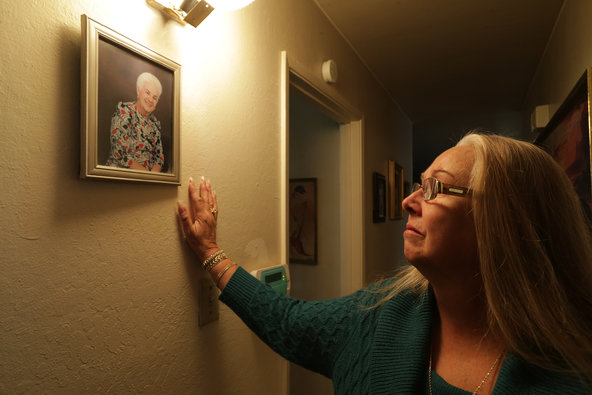 Jim Wilson/The New York TimesMs. Santos in her parents’ house, where a photograph of her mother still hangs on the wall.

Ms. Santos’s mother, Yolanda, began borrowing money against the equity in her home in 2009, when she was in her 80s. Ms. Santos thought the arrangement would defray her mother’s living and medical expenses by providing cash up front.

It was only after her mother died two years later with an outstanding reverse mortgage balance of about $308,000, that Ms. Santos learned the loan had in fact jeopardized her parents’ nest egg. The financial company that extended the loan, Reverse Mortgage Solutions, moved to foreclose unless she paid the full balance of the mortgage.

What Ms. Santos did not know at first was that surviving family members were supposed to be offered the choice to settle the reverse mortgage for a percentage of the full amount. In her case, that lesser amount offered to heirs is 95 percent of the home’s current value, or about $237,000, according to one estimate. Any shortfall if the home sells for less than the debt is covered by a federal insurance fund, which all reverse mortgage borrowers are required to pay into each month.

After being contacted by The New York Times, the lender offered Ms. Santos the option to buy the home for 95 percent of the current value. The only problem is that the home is now worth more than it was three years ago when Ms. Santos’s mother died.

Lora Bitting, 61, said she was crippled by sadness after her father, Jesse, who took out a reverse mortgage on his Muskogee, Okla., home, died in December. Still, Ms. Bitting contacted the lender a month later to begin the process of paying off the $194,254.34 debt, according to a copy of the letter reviewed by The Times.

But because of delays in uploading her letter and a missing trust document, the lender ultimately sped up foreclosure proceedings on her father’s home last month.

There is no data on how many heirs are facing foreclosure because of reverse mortgages. But interviews with elder care advocates, the housing counselors and heirs, suggest that it is a growing problem already affecting an estimated tens of thousands of people. And it is one that threatens to ensnare future generations, as older Americans increasingly turn to their homes for cash. Already, the combined debt of Americans from the ages of 65 to 74 is rising faster than that of any other age group, according to the Federal Reverse. And approximately 13 percent of the reverse mortgages outstanding are underwater, according to an estimate from New View Advisors, a New York consulting firm.

“It’s truly one of the thorniest issues I hear about from a growing number of attorneys,” said Diane E. Thompson, a lawyer at the National Consumer Law Center.

Reverse mortgage lenders say that they abide by federal rules, noting that their goal is to avert foreclosures, which can be costly and time-consuming. And used correctly, reverse mortgages can help older homeowners get cash to pay for retirement. Peter H. Bell, president and chief executive of the National Reverse Mortgage Lenders Association, a trade group, notes that the loans are tightly regulated.

The reverse mortgage market has been in decline since the financial crisis. The number of such loans fell to 51,000 in 2012 from a peak of about 115,000 in 2007. At the same time, the rate of default on reverse mortgages rose to approximately 9.4 percent of loans in 2012, up from 2 percent a decade earlier, according to the Consumer Financial Protection Bureau. As the market foundered, large banks left, replaced by a fleet of smaller lenders and brokers.

Lenders must offer heirs up to 30 days from when the loan becomes due to determine what they want to do with the property, and up to six months to arrange financing. Most important, housing counselors say, is a rule that allows heirs to pay 95 percent of the current fair market value of the property — a price that is determined by an appraiser hired by the lenders. Mr. Bell of the National Reverse Mortgage Lenders Association said that lenders are strictly abiding by the 95 percent rule.

The difference offered by the 95 percent rule can be critical. After the financial crisis, when housing prices tumbled, the disparity between the current value of the home and the total balance on the mortgage often means the difference between keeping a home and losing it to foreclosure.

When Robert Campbell’s mother, Lillie, died in 2012, the outstanding loan balance was $123,773 — a sum that was impossible for him to pay. But, he could have cobbled together the $14,000, or 95 percent of the market value of the Chicago home when Ms. Campbell died. The only problem is that the lender never informed him of that option, according to his lawyer, Kathryn Liss. It wasn’t until Mr. Campbell contacted the lawyer that he learned of an alternative. There are others like him.

“There are hundreds of families who want to keep their homes and are simply not aware of their rights,” Jean Constantine-Davis, a senior lawyer for AARP, said.