What I Learned the Hard Way About Leasing a Car 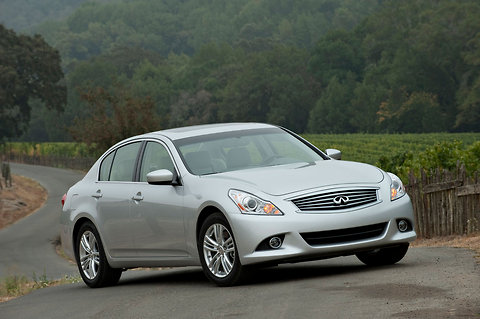 The Infiniti that the writer leased.

The Internet is undoubtedly the great leveler between buyers and sellers. With a few clicks of a mouse or a swipe of your finger, you can comparison shop for items like consumer electronics and patio furniture. Even buying a car, a bastion of obfuscation, disinformation and dealer sleight-of-hand, has succumbed to the radical transparency of the Web. But what about leasing a car? That, as I so rudely discovered, is a whole other story.

Sure, there are many resources online and in print devoted to the finer points of auto leasing. Leasing is a popular way to finance a new car because of the promise of lower monthly payments than on a car loan for an outright purchase. But few sites or apps can prepare you for the emotional turmoil and financial uncertainty of negotiating a lease with a dealer.

Still, I thought, how hard could it be? I am, after all, no rube (I’m the chief information officer of The New York Times and a former business journalist). While I had typically bought cars and held on to them for a decade, leasing appealed this time for several reasons. Not only would the monthly payments be lower than buying, but I could simply turn in the car at the end of the lease and avoid the hassle of trade-ins or private sales. And cars, with their blizzard of digital gadgetry, have become more like computers and less like relatively simple machines that change little over time. Cars now seem more like gadgets you can upgrade every couple of years.

Then, there was the matter of the particularly aggressive lease deals last June on the 2012 Infiniti G37x sedans — $399 a month for 39 months, with no money down, for a car that listed at around $38,000. And the Infiniti was fast, sexy and loaded with the latest in fancy, voice-activated, touch-screen electronics. It was like having an iPhone on wheels.

The challenge was finding a dealer who had the car I wanted at a reasonable price.

So I followed my standard research protocol and went online. I visited auto sites like Edmunds.com, caranddriver.com and cars.com. I checked message boards and customer reviews on Google about dealers. (“SHADY PLACE – HIDDEN FEES,” said one reviewer. “Extremely satisfied,” said another — both about the same dealership. This was not helpful.)

Nowhere on the Web could I find a sample lease agreement so that I could understand all the numbers I would need to know in advance. (That’s why I’m publishing mine here.)

Eventually, I used the consumerreports.org “Build and Buy a New Car” service, which gives you an estimate of your savings off the manufacturer’s suggested retail price, then matches you with three local dealerships. I figured I could use that as a proxy for what type of lease deal I would get. The savings seemed impressive — some as much as 15 percent, or roughly $6,600, off the suggested price. Unfortunately, the dealerships recommended were either in New Jersey or Coney Island in Brooklyn, quite a hike from Midtown Manhattan for someone without a car. None could approach the convenience of Infiniti of Manhattan, which is just under a mile from my office.

I was met at the entrance by Khaled Sari, a salesman. I knew exactly what I wanted — a G37x, premium package, navigation system, interior accents.

The first price he quoted me — $459 a month — seemed absurdly high. After he disappeared to talk to his manager, he came back with a price of $420 a month. This still seemed too high. I wanted $399. But he said $420 was as low as he could go. When I appeared to hesitate, he threw in floor mats and free oil changes for life.

I should have gotten up to leave — that’s usually good for another round of negotiations — but he kept offering his hand for me to shake, saying, “Can I have your business?” The human hand extended in friendship is a powerful gesture, even when the motivation is purely mercenary. Watching his hand float in the air between us made me simultaneously feel sorry for him (he was trying so hard to be a good salesman) and furious that he thought I would fall for such a brazen attempt to manipulate me.

Of course, he was right. I wanted the car. I also didn’t want this process to drag on. I shook his hand. I also put down a $500 deposit, which, of course, was completely unnecessary, because a quick check of the dealership’s Web site revealed that they had dozens of similarly equipped cars available.

My major misstep, however, was to focus on the monthly payment. This, as it turns out, is precisely what car dealers want you to do, because that is only one number among many — and it is all too easy to get distracted by the monthly payment and underestimate or ignore all the other fees and expenses that you either need to pay up front or that determine the price you’d pay for your vehicle if you decide to buy at the end of the lease.

Focusing on the monthly payment, I learned too late, is the equivalent of only knowing your monthly mortgage payment without knowing the interest rate or how much you were even borrowing.

The most important number — whether you buy or lease — is the purchase price. Unfortunately, this number is seldom, if ever, discussed and is buried in the leasing documents, which you will probably only get to see minutes before you sign. That’s probably one reason I ended up with a purchase price close to the suggested retail price when Consumer Reports was telling me I could get a discount of 10 to 15 percent.

But wait, it gets worse. Auto leasing agreements are festooned with arcane but essential terms like residual value and net capitalized cost that can be difficult to understand, especially if you are first becoming familiar with them the day you are supposed to drive your leased car off the lot. And then there are all the closing costs, like destination and acquisition fees, purchase option fees and disposition fees, which eat into your pocketbook and (if you are proud of your negotiating skills) erode your self-esteem.

Unfortunately, you can’t negotiate effectively if you don’t fully understand what you are negotiating. So, armed with the benefit of bitter experience, here’s a financial and psychological road map to what you need to know before signing anything or putting money down.

First, decide exactly what vehicle you want, including color, interior, options, etc., and make sure the dealer has one in stock or can get one before discussing any numbers. Then, make the dealer give you all the numbers up front, not just the monthly payment, but everything on the contract you will eventually sign. Get a copy of that agreement if you can, or barring that, get everything in writing.

Keep in mind that whether you are buying or leasing, the most important number to focus on is the actual negotiated price of the vehicle. This, plus the acquisition fee (not to be confused with the destination charge), equals your capitalized cost. The capitalized cost and the rental payment, as the fine print in the “New York Motor Vehicle Leasing Disclosure Box” helpfully tells you, “may be negotiable.”

Now, here is where it gets tricky. Directly under the line for capitalized cost is the capitalized cost reduction, which the leasing agreement describes as cash down and the value of any trade-in vehicle. In a no-money-down lease like mine, that line should read $0.

So why was mine $1,993? This was a number we had never negotiated or even discussed. When I asked Khaled’s brother Amir, who was handling the paperwork, he said that included the destination charge and “other fees.” Of course, I should have stopped everything right there, but I had already been at the dealership for more than an hour, and he sounded so reasonable and matter-of-fact about it that I just let it slide. Another big mistake.

When I mentioned to Khaled in a telephone interview recently that the capitalized cost reduction was the one number that had taken me by surprise, he said that “everybody’s entitled to their own opinion about the process.” Khaled insisted that the monthly payment was still the best number for consumers to focus on. “I’m very straightforward and honest,” he said. “That’s how I sell cars.”

Yet even if you successfully negotiate the capitalized cost reduction to zero, there is still the matter of the vehicle’s residual value — the purchase price at the end of the lease if you decide to buy the car. Generally, this number is determined by a percentage of depreciation of the original purchase price, which is why in the end, leasing is not that different from buying: You still need to focus on the purchase price as though you were buying the car right then, because at the end of the lease you may decide to buy.

That will most likely not be an option in my case because the residual value of my vehicle is $25,020.15, which will probably be at or above market value for an Infiniti G37x with around 30,000 miles.

To add insult to that injury, there were other fees on the leasing agreement that are almost comically arrayed against the consumer. If I decide to turn in the car at the end of the lease without leasing another from the dealership, I must pay a $395 disposition fee. Yet if I decide to buy, I must pay a $300 purchase option fee. Add to that a host of smaller fees (a tire fee of $12.50, a doc fee of $75), which, I’m convinced, exist partly to distract consumers from the larger fees.

So how did I end up with such a bad deal? It turns out that the day you’re going to pick up your new car is the absolute worst time to negotiate, unless of course, you are willing to walk out. And while I told myself I was willing to walk, I also wanted my car.

This is where car dealers, with their years of experience in sales psychology, have you at a disadvantage. How could someone who knew all the pitfalls still fall into the pit? Perhaps I was out of practice negotiating with actual humans. After so many years of shopping for bargains online, I made the mistake of believing that searching on Google was haggling.

I don’t blame anyone at Infiniti of Manhattan for the fact that I didn’t get nearly as good a deal as I might have had I known then what I know now. They were only doing their jobs, which I define as extracting as much money from their customers as possible while making them feel good about it. At this, they excelled. And to Khaled’s credit, he did do a great job of taking me through my new car’s many cool electronic features.

I have no regrets. The G37x is a terrific car. And I learned something valuable about my susceptibility to certain well-worn but effective sales tactics when the seller has something I want to buy. Even now I’m anxious that the dealership may give me a hard time when I show up for one of my lifetime free oil changes they promised me. It would really be a drag if I had to haggle about it.

View the original article from The New York Times