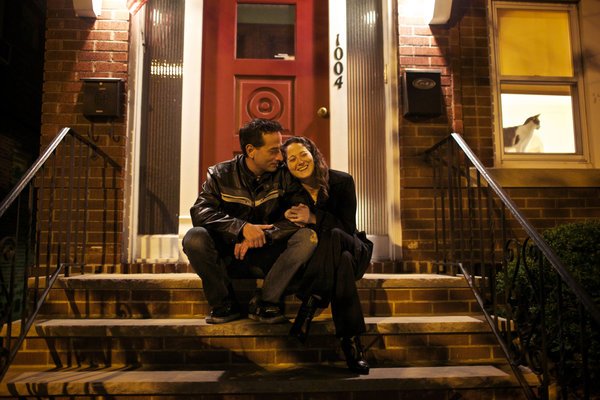 Jennifer and Scott Bartone set aside a full day to fine-tune finances and make headway on the money-related tasks that never seem to get done.

Jennifer and Scott Bartone were married in October after a seven-year courtship. But they did not have a serious conversation about money until this week.

And boy, did Ms. Bartone, a 32-year-old legal recruiter, and Mr. Bartone, a 43-year-old bartender, have a lot to talk about. I was in their living room, in North Bergen, N.J., to witness it all as part of a “fiscal health day” exercise, where I promised to spend several hours helping readers organize their financial life.

The goal of our meeting was to try to reconcile their different money philosophies before they opened a joint bank account to handle their household expenses. They needed to figure out a way to track Mr. Bartone’s earnings, most of them in cash, which they were not entirely sure of. She also wanted a better way to track their spending (and overspending). And both of them had accumulated significant credit card debt, which had to be tackled before they could begin to think about saving for a house.

“Financially, we are opposites,” said Mr. Bartone, who has a sleeve of colorful tattoos that climb from each wrist to his elbows. “Total, total, total opposites.”

Both of them were honest about their financial behavior: Mr. Bartone acknowledged that he was the spender. Ms. Bartone described herself as determined and goal-oriented, and said she had saved significant sums in the past. But they now owe more than $30,000 on credit cards, a topic that Ms. Bartone said she had avoided broaching. So they had not had the tough talk about how best to stanch the bleeding and work on a joint plan to get out of debt. “I have been really cautious about not stepping on his pride,” she added.

But they volunteered to put it all on the table for their personal fiscal health day, the brainchild of my colleague Ron Lieber, which involves setting aside a full day to fine-tune finances and make headway on the money-related tasks that never seem to get done. I asked readers on the Bucks blog to submit their pleas, with the promise that I would meet with the candidate with the most compelling story.

Nearly 100 readers responded, many of them needing something more like an overhaul than a financial tuneup. There were tales of paralyzing student loan and credit card debts and crushing medical bills, as well as pleas from single people and young families hoping to do better than live paycheck to paycheck. Some lost their jobs in the recession, and had gotten new, lower-paying work and were trying to figure out how to live on less.

I chose the Bartones in part because their financial issues are all too common. Ms. Bartone, who has curly brown hair and a contagious smile, wanted to make sure she and her husband were on the same financial page and to set priorities on their financial to-do list. She also felt it would help to have a neutral third party to walk them through the process given that they are financial opposites. She calls herself neurotic and keeps spreadsheets. He puts his cash tips in a kitchen drawer.

Here is what we managed to get done in one afternoon:

MONEY TALK  The biggest accomplishment, by far, was having the newlyweds sit down at their dining room table to actually talk about their financial life, their differing outlooks and how their views were influenced by their upbringings. This was a huge step. My suggestion, unromantic as it may sound, was to make the money talk a weekly ritual, at least until they learned more about their income and spending patterns and made progress on paying down their debts.

CREDIT CARD DEBT The couple have lived together for several years, yet each still did not know exactly how much debt the other had. So Ms. Bartone created two lists of each of their credit cards, along with the outstanding balances and interest rates. She has already started to pay down the cards with the highest rates first, and she said she would help her husband set up his own plan of attack. But she had a good question: since the interest rates on Mr. Bartone’s cards were more than twice as high as hers, should she focus on paying down his debt first?

I told her she could not enable his behavior, particularly if he did not start to control his spending. But I also contacted an expert after I left — Kristin Harad, of VitaVie Financial Planning, who had seen this situation many times before.

“Creating healthy habits as a unit is paramount,” she said, since they are building a future together. So yes, they should focus on paying down Mr. Bartone’s debt first. But that also means Mr. Bartone needs to remove the plastic from his wallet (and frankly, the financial planner said, so does Ms. Bartone). They should use only cash and debit cards and stow the rest of the cards away. (We will talk about how they managed to accumulate their debt below.)

CREDIT SCORES The couple said they did not know each other’s credit scores, though the topic had come up from time to time. “She’s always asking me mine,” Mr. Bartone said.

We decided it was a good idea to check their scores, even though it would cost them $40. After I left, the couple purchased their scores through MyFico.com, which costs $19.95 a score. Though several factors determine your FICO score, outstanding credit card debt can pull it down. Even with their debts, however, their scores weren’t too bad: Mr. Bartone’s was 697 and Ms. Bartone’s was a respectable 732 (on a scale of 300 to 850). Ms. Bartone already pulls a free credit report from each of the three major credit agencies each year at annualcreditreport.com to be sure there are no mistakes, since she has found errors in the past. She promised to help Mr. Bartone do the same.

TRACKING SPENDING Their two-bedroom apartment on the first floor of a brick home is furnished practically, with bare hardwood floors and oversize beige sofas. Pictures of their “children” — three cats named Bouncer, Chloe and Stormy — hang on one wall, with engagement photos on another. There is not much obvious physical evidence of overspending, with the exception of the 55-inch 3-D television, which replaced a 37-inch screen that was in perfect working order.

“That was a couple of years’ battle,” Mr. Bartone said.

“He took tax refund money to buy the TV,” she added, hinting that she had just given in after the television dropped to a price she found acceptable. (They received a tax refund of about $5,000: $1,500 went to pay bills and the new television, while the remaining $3,500 went into savings.)

Like many people in credit card debt, Mr. Bartone does not know exactly how he got there, so we tried to do some quick forensic accounting. He said he surprised his wife with a photo booth and a magician at their wedding, and they extended their honeymoon in Playa Mujeres, Mexico, all of which probably added about $5,000 to his overall bill. Another $860 remained on a J. C. Penney card. And last year, Ms. Bartone said, he bought boxing equipment and a tension weight-lifting machine to outfit the gym he had created in their garage. Then there were weeks when the bar was slow, so he pulled out the card to pay for household expenses.

As for Ms. Bartone, she said her income as a legal recruiter, which is largely paid on a commission basis, fell precipitously in 2008 and 2009, mostly because she had many financial services clients and none were hiring. So she raided most of her 401(k) savings, or about $35,000, as well as another savings account. Still, she accumulated credit card debt. (She has already paid down about two-thirds of her student loan debt. She has about $8,000 remaining.)

I suggested the couple begin using a service like Mint.com, which allows users to connect all their financial accounts, and compiles and categorizes all of the transactions in one place. The big drawback is that they will have to use their debit cards for payments to be automatically transcribed; cash transactions must be entered manually, though that can be done through an app on their phones. Ms. Bartone immediately signed them up.

TRACKING INCOME They both have variable incomes. Mr. Bartone has good days and bad ones behind the bar. Ms. Bartone works largely on commission, though her firm pays her a “draw,” which is a small steady paycheck that is more of a loan that is deducted from her commissions. So budgeting is hard, but a big part of their problem is that they do not really know how much they collectively have to work with.

Mint.com allows users to add cash income, and it will track any deposits either of them makes. But if adding Mr. Bartone’s cash income manually was too much of a hurdle, I suggested he write it all down on an index card he could keep in his cash drawer. When he does make those deposits, Ms. Bartone, a natural bookkeeper, will be able to keep better tabs on how much he is bringing in through the online money program.

JOINT ACCOUNTS The couple has individual accounts at three brick-and-mortar banks. Keeping an account at one of them was important because Mr. Bartone needed a place to physically deposit his tips without too much trouble. So I suggested staying with the bank with the lowest fees (or finding a new one entirely), and then opening another joint account at an online bank with a higher interest rate, or a bank like Ally or Capital One (formerly ING Direct) that allows customers to label different savings subaccounts. That way, they can also start building an emergency account, even before accelerating repayment of their debts. That will help them build a cushion should their income drop or an unanticipated expense occur. Their goal should be to accumulate at least three months of expenses, Ms. Harad, the financial planner, said, and work their way up to six months.

Ms. Bartone’s eyes lit up at the prospect of being so organized.

RETIREMENT Ms. Bartone has a 401(k) and an Individual Retirement Account at Vanguard, which I was happy to hear. Her company does not offer a match and she is not saving much now, since they want to tackle the high interest-rate debt first. But since we are trying to accomplish a lot in one afternoon, I suggested they also open an I.R.A. at Vanguard for Mr. Bartone, even if they do not put money in it right away. That way, when he is able to pay off more debt, the I.R.A. will be waiting for his deposits (which should be automated).

We could have used another day to get even more done. But that the couple broke the ice now, during the honeymoon period, was probably the most important accomplishment of all.

“The lesson we learned,” Ms. Bartone said, “was that we both have to be open.”