The largest financial commitment that many new parents make is also the most emotional: choosing a full-time caregiver for your child as you head back to work. 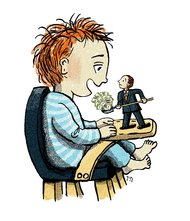 As many parents know all too well, it’s a giant expense, often second only to housing costs. Many families pay the equivalent of college tuition, and that’s not for a high-priced nanny who can teach your child to speak Mandarin. It’s for day care. In 31 states and the District of Columbia, the annual average cost for putting an infant in a day care center full time was higher than a year’s tuition and fees at a four-year public college in that state, according to a study released this month by Child Care Aware of America, a nonprofit group whose members include child care referral agencies.

Add a second child to the mix and suddenly the costs of full-time day care — for an infant and a 4-year-old — exceed the annual median rent payments in every state, according to the analysis, which uses 2012 data from the Child Care Resource and Referral’s state networks and local agencies.

Incorporating this expense into the family budget is disruptive, to say the least. Couples who are saving respectable amounts for retirement and other financial goals, whether for a down payment or a vacation home, can easily fall off track. “The costs are what they are, usually, and you just have to do your best,” said Annette Clearwaters, a financial planner in Manhattan.

Entrusting your little one to a caregiver isn’t exactly the time to bargain-hunt, either, though some guilt-ridden parents may feel they need to spend more than they actually do. But families across all income levels will need to run the numbers. That includes trying to anticipate unexpected costs, and perhaps even considering options, like an au pair, that you may have previously thought were out of reach.

Here is a primer on what to expect on prices and tax breaks, as well as advice on how to approach this decision.

HOW MUCH CAN I AFFORD? You probably intuitively know how much you can generally afford to spend without making drastic changes to your lifestyle. But if you were to sit down with Kristin Harad, a financial planner in San Francisco whose firm, VitaVie Financial Planning, focuses on new parents, she would make sure you “know your numbers.” That includes how much income you have, figuring out your fixed costs (like your mortgage or rent, and making sure they are still feasible), how much you want or can continue to save for other financial goals and what varies month to month, items like dinners out and groceries.

Unless your income is expected to rise, something else will probably have to be trimmed, whether that is dialing down your savings or shaving your discretionary spending. “We talk a lot about how much they are willing to give up something else to pay for the more expensive care,” Ms. Harad said. “With the first child especially, you have never done it before so you’re going to be more nervous. But as you eventually see, children can thrive in different environments, so you can use a day care or a shared nanny and realize you are not a horrible parent and the child is actually engaged and enjoying it.”

Nor do your choices have to be restricted to one arrangement. “Sometimes they go to day care three days and have a nanny for two days,” Ms. Harad said. “There is no black or white answer but a whole array of gray options.”

WHAT OPTIONS COST Some parents believe that the group dynamics of day care will help prepare their child for the world, or at least kindergarten, while others are willing to pay top dollar for a responsive nanny who won’t be distracted by other children. But for many families, the arrangement will largely be driven by what they can afford.  So how do you select quality care without driving the family into bankruptcy?

In most child care situations, costs tend to vary by the child’s age, the hourly commitment each week and where you live. According to Child Care Aware’s research, in the District of Columbia, the average cost of full-time day care for an infant was $21,948 annually. In Massachusetts, it was $16,430 a year, and in New York, $14,939.

Nannies typically cost more, though they can often become more cost-effective when you have more than one child. According to Care.com, the national average hourly rate for nannies is $11.73 and ranges from $8.26 to $15.19 an hour, depending on the state; those figures reflect the rates posted on a sampling of the 150,000 job postings on their website for roughly the last year. The nanny pay scale rises in expensive metropolitan areas, of course, including New York. Parents who employ nannies in brownstone Brooklyn, for instance, pay anywhere from about $12.75 to $19.25 an hour, according to Park Slope Parents, a local parents group.

When you consider those numbers, au pairs start to seem like a relative bargain, as long as you have an extra bedroom, provide meals and don’t mind the live-in arrangement. Au pairs — who are 18 to 26 years old and in the United States on a special cultural exchange visa regulated by the State Department — generally live with a family for a year, but they can stay up to two years. Cultural Care Au Pair said it generally cost $355 a week (less than $8 an hour for a 45-hour week, or about $18,000 annually) to hire an au pair, but that includes items like their medical and travel insurance. Another agency, Au Pair in America, had similar pricing.

UNEXPECTED COSTS Several not-so-obvious costs may also arise. Do you need another caregiver when day care is closed or when the nanny is on her (paid) vacation? Some parents are also surprised when it comes time to pay a nanny’s holiday bonuses (a week to two weeks of pay). There are also the complex tax- and insurance-related requirements of becoming someone’s employer. “Most families don’t realize that once they bring a provider in the home and they earn $1,800 a year or more, that quickly you become an employer,” said Donna Levin, co-founder of Care.com.

TAX BREAKS A couple of tax breaks may defray costs. If your employer offers flexible spending accounts for dependent care, this is usually the better option for higher-earning couples: You can set aside up to $5,000, before taxes, to pay for child care for children under 13, according to Berdon, a New York accounting firm.. Alternatively, you may be eligible for the child and dependent care credit,  which reduces your tax bill by 20 to 35 percent of the child care costs (up to a maximum of $3,000 in qualifying expenses for one child, and $6,000 for two or more). The credit decreases as your income rises.

WHAT YOU RECEIVE You need to think through what life will be like with each option. Can you handle the stress of getting your infant or toddler up, fed, dressed and ready for day care each morning while also getting yourself out the door? It’s certainly easier to have Mary Poppins show up and take over while you have your coffee. But if Mary gets sick, you’ll need backup care. On the other hand, if your day-care-bound child gets sick, you’ll also need backup. And if you’re caught at work, Mary might be willing to stay late, while day care will count the minutes and charge you for them.

On the other hand, day care may help with socialization and might have your child painting and learning sign language before she can talk. A social nanny can make up for that, with one-on-one attention, play dates and other outings. Or you can double up and share a nanny.

SHOPPING FOR CARE Parents need to comparison shop, bringing along the usual lists of questions to keep track of who is certified in cardiopulmonary resuscitation, among other things. But the single most important variable may be far simpler than what many new parents think.

“When it comes to quality of care, it really boils down to the relationship between that child and the people who are taking care of that child,” said Walter S. Gilliam, associate professor of child psychiatry and psychology at the Yale School of Medicine. “Regardless of what choice you make, you need to form a strong relationship with the child care provider and feel O.K. about it, because your child will be reading those cues.”

At day care, child to caregiver ratios matter, to some extent. For babies up to about a year to 18 months, he prefers two children per caregiver, but he said he could live with three to one. For the toddler, he prefers three children for every provider, but four to one is acceptable. And at about 3 years old, seven children per adult is all right. “But again, it really depends on what the ‘one’ is like,” he said.

“Costs can be really, really high,” Dr. Gilliam said. “But the reality is, many parents think if it costs more, it is better, and that is not necessarily the case.”