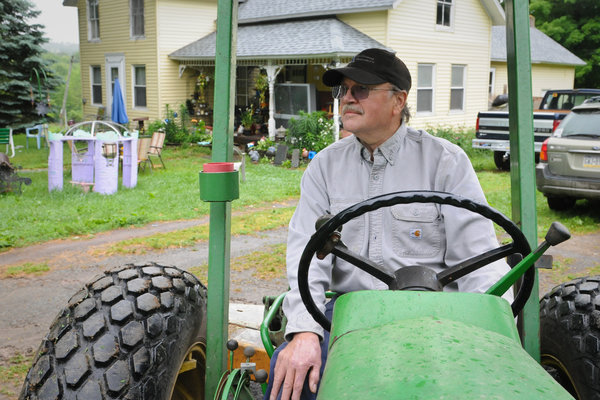 Bradly D. Swartz, of Meshoppen, Pa., said his credit was ruined by telemarketers who emptied his checking account.

The pitch arrived, as so many do, with a friendly cold call.

Bruno Koch, 83, told the telemarketer on the line that, yes, of course he would like to update his health insurance card. Then Mr. Koch, of Newport News, Va., slipped up: he divulged his bank account information.

What happened next is all too familiar. Money was withdrawn from Mr. Koch’s account for something that he now says he never authorized. The new health insurance card never arrived.

What is less familiar — and what federal authorities say occurs with alarming frequency — is that a reputable bank played a crucial role in parting Mr. Koch from his money. The bank was the 140-year-old Zions Bank of Salt Lake City. Despite spotting suspicious activity, Zions served as a gateway between dubious Internet merchants and their marks — and made money for itself in the process, according to newly unsealed court documents reviewed by The New York Times.

The Times reviewed hundreds of filings in connection with civil lawsuits brought by federal authorities and a consumer law firm against Zions and another regional bank that has drawn even more scrutiny, First Bank of Delaware. Last November, First Delaware reached a $15 million settlement with the Justice Department after the bank was accused of allowing merchants to illegally debit accounts more than two million times and siphon more than $100 million.

The documents, as well as interviews with state and federal officials, paint a troubling picture. They outline how banks profit handsomely by collecting fees while ignoring warnings of potential fraud and, in some instances, enabling dubious merchants to prey on consumers.

Anyone, young or old, can be targeted by unscrupulous marketers. But for several reasons — financial worries, age, loneliness — older people are particularly vulnerable to what is known as mass market fraud, deceptive pitches that arrive by telephone, mail and the Internet.

The problems at Zions and First Delaware, where the banks became financial conduits and quiet enablers for questionable businesses, extend well beyond those two institutions, federal authorities say. Indeed, banks across the country, from some of the largest to smaller regional players, help facilitate billions of dollars of fraud each year, according to interviews with consumer lawyers and state and federal prosecutors.

Officials at the Justice Department say they are taking aim at banks’ role in giving predatory lenders and fraudulent merchants access to the United States financial system. The department is considering civil and criminal actions against a number of banks for allowing tainted money to flow through branches, for failing to safeguard against suspicious merchants, and for originating transactions on behalf of businesses that they know make unauthorized withdrawals from customer accounts, according to people with direct knowledge of the matter.

“You can’t close your eyes anymore to the fraud that you are allowing to happen,” said Michael Blume, the director of the consumer protection branch at the Justice Department. “Banks are in business to make a profit. Unfortunately, this is a moneymaking operation at consumers’ expense.”

In all, Zions in effect let roughly $39 million be withdrawn from hundreds of thousands of accounts from 2007 to 2009. Much of that money was ultimately transferred to bank accounts in Canada, India and the Caribbean, according to a Times review of court records. Many of the Internet merchants’ customers were older people and others on shaky financial footing. But that, too, worked in banks’ favor: the withdrawals set off a cascade of insufficient fund fees — more than $20 million in all, court records show.

“Zions takes seriously the need to prevent the banking system being used for fraudulent purposes; however, it is our general policy not to comment on pending legal matters,” said James R. Abbott, director of investor relations for Zions. “There is another side to this story, other than that told by the plaintiff. Our side of the story will be told at the appropriate time through the legal system.”

A spokesman for First Delaware declined to comment. Neither National Health Net Online nor Modern Payments responded to e-mails and telephone messages.

Mr. Koch, a retired teacher, said that he was usually skeptical of telemarketers. But when his phone rang one afternoon in November 2007, he recalled, he listened as the caller identified himself as a Medicare official and suggested that Mr. Koch update his health insurance card. Mr. Koch, as requested, supplied his bank information.

But instead of a new insurance card he received notice that he had been enrolled in National Health Net Online’s discount health plan. The company had withdrawn $299.95 from his bank account as payment, according to records reviewed by The Times.

National Health, a unit of NHS Systems Inc. of Collegeville, Pa., has a troubled history. In April, the Federal Trade Commission permanently banned the company from telemarketing and ordered it to pay a $6.9 million fine after accusing NHS Systems of defrauding consumers. NHS Systems did not return multiple telephone calls seeking comment.

“I was so angry,” Mr. Koch recalled. He demanded a refund from NHS Systems but was not reimbursed.

Between 2007 and 2009, tens of thousands of Americans, many of them over age 65, lodged complaints with state attorneys general, banking regulators and the F.T.C., requesting refunds for bank charges that they say were unauthorized, according to court records.

Lawyers at Langer, Grogan & Diver sued Zions, representing several hundred thousand consumers who said that NHS Systems and other telemarketers took money from their accounts without authorization. The lawsuit, which is pending in a federal court in Pennsylvania, claims that Zions effectively gave “fraudulent marketers direct access to every bank account in the United States.”

According to internal e-mails and other documents filed in connection with that suit, Zions bankers recognized something was amiss early on. An outsize number of customers were disputing payments to certain processors. The rates of return — that is, the percentage of payments that are returned for insufficient funds and lack of authorization — stood out. “WOW,” one Zions officer wrote in an e-mail after seeing the numbers.

Others inside Zions raised alarms, too. Zions executives told colleagues that the high return rates were a troubling sign. In January 2007, one warned that the rates were “staggering.” In 2007, more than half of the payments that one Internet merchant was routing through Zions were bounced back — roughly 40 times the industry standard.

Reviewing complaints about one Internet merchant, a Zions vice president wrote, “Every red flag possible went off in my head.”

And yet the bank kept handling the transactions, court records show. Why? One payment processor executive suggested an answer: the business was a gold mine.

“Turning them off and sending them somewhere else is not an option,” this executive told Zions in an e-mail in September 2007.

Officials at the F.T.C., the Justice Department, the Consumer Financial Protection Bureau and the Federal Deposit Insurance Corporation say this is just the tip of the iceberg, according to people with knowledge of the matter.

In a move that prosecutors say is a harbinger, the United States attorney in Philadelphia sued the First Bank of Delaware in November, claiming the bank effectively abetted “fraudulent Internet and telemarketer merchants,” court records show. The bank, the lawsuit claims, stayed “willfully blind” to the fact that the merchants were illegally taking money from customers, including a disproportionate number of seniors, through “fraud, trickery and deceit.”

Like Zions, First Delaware dealt with intermediaries rather than directly with the merchants.

But as Zane David Memeger, the United States attorney in Philadelphia, said in the lawsuit against First Delaware, bad actors “must access the banking system to gain access to the consumer’s money.”

At First Delaware, return rates for some merchants exceeded 80 percent. Yet the more questionable the merchant, the more fees a bank stands to collect, prosecutors say. Every time victims flag an unauthorized charge and demand money back, banks collect fees to process the return. Those fees are far larger, according to banking documents, than the ones charged for processing the original transactions.

First Bank of Delaware anticipated that revenue from its processing business would swell by more than 1,300 percent, from $150,000 in 2010 to roughly $2 million a year later, court records show.

Bradly D. Swartz, of Meshoppen, Pa., learned firsthand how much such practices can cost consumers. Mr. Swartz, 59, was trying to stretch his retirement savings when a telemarketer called in 2007 with what sounded like good news: Mr. Swartz had won a prize. All he had to do to collect was fill out a money order.

Then, starting in 2007, Mr. Swartz said, a subsidiary of NHS Systems — the same company that Mr. Koch had dealt with — started withdrawing $19.95 a month from his checking account. After emptying the account, National Health referred him to a debt collector, Mr. Swartz said.

Mr. Swartz said his credit was ruined. He now works part time at Walmart to supplement his savings.

“I have to work until the day I die, and these greedy banks just profit,” he said.

Federal officials say banks not only must know their customers, but also their customers’ customers in order to ensure that consumers in general, and older Americans in particular, are not at risk. The First Delaware case, they say, is a warning to the industry.

“Nothing sharpens the focus for banks like an enforcement action,” said Michael Bresnick, the director of President Obama’s Financial Fraud Enforcement unit.

A version of this article appeared in print on June 11, 2013, on page A1 of the New York edition with the headline: Banks Faulted As Taking Role In Web Fraud. Originally published by the New York Times.