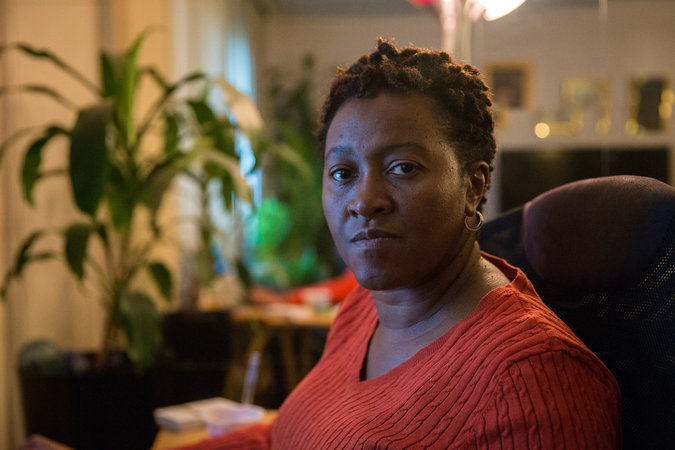 Bernadette Gatling says she has lost job opportunities because employers saw debts on her credit report that had been voided. Credit Ángel Franco/The New York Times

Two of the nation’s biggest banks will finally put to rest the zombies of consumer debt — bills that are still alive on credit reports although legally eliminated in bankruptcy — potentially providing relief to more than a million Americans.

Bank of America and JPMorgan Chase have agreed to update borrowers’ credit reports within the next three months to reflect that the debts were extinguished.

The move is a victory for borrowers whose credit reports have been marred as a result of the reported debts, imperiling their job prospects and torpedoing their chances of getting new loans.

The change by the banks emerged this week in Federal Bankruptcy Court in White Plains, where the two banks, along with Citigroup and Synchrony Financial, formerly GE Capital Retail Finance, face lawsuits accusing them of deliberately ignoring bankruptcy discharges to fetch more money when they sell off pools of bad debt to financial firms.

The lawsuits accuse the banks of engineering what amounts to a subtle but ruthless debt collection tactic, effectively holding borrowers’ credit reports hostage, refusing to fix the mistakes unless people pay money for debts that they do not actually owe.

It is not the only pressure. Lawyers with the United States Trustee Program, an arm of the Justice Department, are investigating the banks, said several people briefed on the inquiry, about whether the banks are deliberately flouting federal bankruptcy law.

In an apparent, if oblique, reference to the inquiry, a lawyer for Synchrony Financial told the judge at a hearing this year that the lender was under “investigation” by the Justice Department.

JPMorgan, Synchrony Financial and Bank of America declined to comment for this article.

But the banks have offered defenses in court documents, arguing that they comply with the law and accurately report discharged debts to the credit agencies. Their lawyers have also argued that the banks typically sell off debts to third-party debt buyers and have no stake in recouping payments on the overdue bills. The banks’ practices were the subject of a front-page article in The New York Times.

Without admitting any wrongdoing, lawyers for JPMorgan Chase and Bank of America agreed to ensure that bankruptcies were registered on credit reports. A lawyer for JPMorgan Chase, according to court documents, said that by August the bank would ensure that all debts discharged in Chapter 7 bankruptcy were correctly recorded.

Under federal law, once a borrower has erased a debt in bankruptcy, banks are required to update the credit reports to indicate that the debt is no longer owed, and remove any notation of “past due” or “charged off.”

Bank of America promised to go further, agreeing to fundamentally change the way the bank reports all the stale debts that are sold to financial firms. For all credit-card debts sold since May 2007, court records show, the bank will remove any marks on consumers’ credit reports. That way, a lawyer said, “should a previously sold credit card account go through a bankruptcy discharge,” the mark will already be gone.

Together, the decisions could help more than one million Americans.

They are people like Bernadette Gatling, a hospital administrator, who went through bankruptcy to void debts she owed on Chase credit cards. While the process was grueling, she said, she thought it would offer her a second chance.

She was floored in March 2014 when three years after bankruptcy, she found that her credit report was still marred by the seemingly unvanquishable debts.

“I lost job after job because of this,” she said, adding that potential employers would suddenly stop calling once they viewed her credit report.

There has been a fierce battle over the lawsuits, brought by Charles Juntikka, a bankruptcy lawyer in Manhattan, and George F. Carpinello, a partner with Boies, Schiller & Flexner.

Judge Robert D. Drain, who is presiding over the cases, has repeatedly refused the banks’ requests to throw out the lawsuits. In July, when he refused to dismiss the case against JPMorgan, he said, “The complaint sets forth a cause of action that Chase is using the inaccuracy of its credit reporting on a systematic basis to further its business of selling debts and its buyer’s collection of such debt.”

At a hearing in April, transcripts show, the judge criticized Citigroup for not changing the way it reports debts to the credit reporting agencies. “I continue to believe there’s one reason, and one reason only, that Citibank refuses to change its policy,” the judge said. The reason, the judge went on, is “because it makes money off of it.”

In a statement, a spokesman for Citigroup said the bank “takes this issue very seriously,” adding that the bank has made a proposal to the plaintiff’s lawyers “consistent” with what the other banks have proposed.

In the hearing this week, lawyers for Citigroup indicated that they were on the brink of making a change similar to what Bank of America and JPMorgan Chase have agreed to, an alteration that could change the credit reports of tens of thousands of people. For many borrowers, the credit report is the difference between getting a job and being turned down.

With so much at stake, borrowers are willing to do almost anything — even pay debts that they worked hard to discharge in bankruptcy.

Diane Torres, who went through bankruptcy in 2010, said she was on the verge of becoming one of the people who paid for debts she no longer owed. The only thing that stopped her, Ms. Torres said, was that she could not afford it.

When she contacted both lenders, Ms. Torres said, she was told that unless she paid, the debts would remain as charged off.

“I felt desperate,” she said. “It was urgent that I pay these debts or else I would not get the job that I really needed.” But after, at the suggestion of her bankruptcy lawyer, she provided the credit union with a record that she had voided the debts in bankruptcy, she got the job.