By JESSICA SILVER-GREENBERG and MICHAEL CORKERY 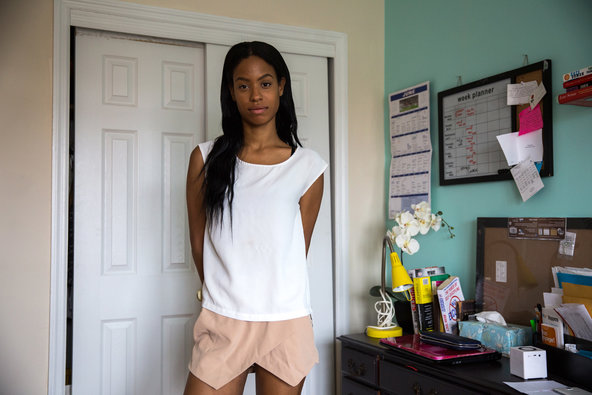 Jake
Naughton/The New York TimesCharlette Williams in Queens found that records of past bank overdrafts prevented her from opening a new account.

In her early college years, when Charlette Williams started routinely mismanaging her finances and pushing her checking account balance into the red, she never thought the mistakes would haunt her five years later, she said. Now, she is paying a steep price.

Ms. Williams, a 25-year-old resident of Queens, is one of more than a million Americans who have been effectively blacklisted from the mainstream financial system because they overdrew their accounts or bounced a check — mistakes that routinely bedevil young and low-income consumers, financial counselors say. While Ms. Williams paid back Bank of America the roughly $700 that she owed, a record of her youthful transgressions remains in a vast private database, preventing her from opening a new account.

Such databases, used by Bank of America, JPMorgan Chase and other big banks, were intended to weed out serial fraudsters. Now, regulators say, banks are screening out potential customers and swelling the ranks of the so-called unbanked — the roughly 10 million households in the United States that lack even a basic bank account.

On Monday, New York’s attorney general will become the first government authority to take aim at how banks use the databases, according to people briefed on the matter, who spoke on the condition of anonymity. The attorney general’s office is expected to announce that Capital One has agreed to fundamentally change the way it uses the largest database, ChexSystems, barring only customers who land in the database for fraud.

The deal stems from a broader investigation by the attorney general, Eric T. Schneiderman, into how the nation’s largest banks use the databases.

As part of that inquiry, he requested more information from six banks, including Bank of America, Capital One and JPMorgan, sending letters that expressed concern that banks might be “improperly denying or otherwise restricting banking access to New York consumers,” according to copies reviewed by The New York Times.

Capital One, with 270 branches throughout the state, was quick to cooperate, the people said. The bank declined to comment.

Other regulators are starting to examine the role these databases play in restricting access to the banking system. The Consumer Financial Protection Bureau is also “monitoring banks’ use of specialty consumer reporting agencies,” a spokeswoman, Moira Vahey, said.

Julie Menin, the commissioner of the New York City Department of Consumer Affairs, says that banks’ use of the databases has hampered efforts to help the more than 825,000 New Yorkers who do not have bank accounts.

“We are extremely concerned about it because people who have made small errors are driven onto the margins of the financial system, where they really can’t save for the future,” she said.

Until they are rejected for a bank account, many people say they have no idea that their financial history has been marred.

Carmen Mask, 43, who lives in St. Paul, said she was surprised when a bank denied her application for a checking account this year. With a steady job, she said, she thought she could easily secure a bank account. Only after being denied, she said, did she realize that the barrier was a negative report in ChexSystems for overdrawing about $500 from another bank account.

Under the Fair Credit Reporting Act, a federal law meant to prevent the flow of inaccurate consumer information, ChexSystems must provide a copy of its report to borrowers. The only problem, financial counselors say, is that most people do not know to ask.

And ultimately, the decision of whom to accept remains with the banks. “ChexSystems seeks to receive and provide accurate information to banks to enable a client bank to decide whether it wants to accept a particular consumer as a bank customer,” a spokeswoman for the company said.

For their part, the banks say that they use the databases to screen for potentially risky customers, adding that a negative report in ChexSystems alone is unlikely to disqualify someone from getting a bank account. Banks note that they cull the information to separate people who made errors from those who deliberately committed fraud.

But the New York attorney general’s investigation showed that even people who had overdrawn their account, or bounced a single check, were routinely excluded, according to people briefed on the matter. When Capital One began examining its own use of the databases after being contacted by the attorney general, it realized that the disqualifications were too broad, the people said.

The consequences of mistakes — negative marks typically stay in the databases for at least five years — are far too extreme, financial counselors and regulators say.

“People who have overdrawn their accounts by $300 or $400 are forced to live without a bank account for five years,” said Eva Margolis, the director of Eastside Financial Center, a nonprofit in St. Paul.

Without access to a checking account, many have no choice but to rely on costly alternatives for even the most basic transactions, like paying bills, withdrawing money and wiring funds. At first blush, the fees can seem relatively small: $15 to cash a check, for example, or $1 to place a money order. For people already living on shaky financial footing, however, the costs can quickly add up, eroding a chunk of their paychecks before they even have access to their cash.

Lillian Lewis, 28, who was denied a bank account in February because of a black mark in ChexSystems, said that nearly 10 percent of her $450 weekly paycheck was eaten up by fees. “It’s just so discouraging,” Ms. Lewis, who lives in the Bronx, said.

Residents of two neighborhoods in the Bronx paid more than $19 million each year on check cashing fees alone, according to a 2008 study by New York’s consumer affairs department.

“Even if it’s $20 in fees, that is $20 that isn’t being put aside, and it means that a whole swath of people are at a true disadvantage,” said Joseph Frewer, a financial counselor at Neighborhood Trust Financial Partners, a nonprofit in New York.

Some people, like Ms. Lewis, say that they have gotten creative, using a bunch of prepaid cards to effectively simulate a savings and checking account that enables money to be separated from a pot of cash for paying basic bills. But the prepaid cards have their own fees, including fees for monthly maintenance. Losing the cards, loaded with cash, can be devastating, too.

The repercussions of not having bank accounts go beyond costs. For low-income Americans who may already be living in crime-ridden neighborhoods, carrying around money from a check casher can be dangerous. When the Pew Charitable Trusts conducted a two-year study of 1,000 families in Los Angeles that lacked bank accounts, researchers found that one in five lost money — on average $729, or the equivalent of two weeks of household expenses.

It is not just the working poor who end up on the blacklist. An increasing number of young people, shouldering student debt and facing uncertain job prospects, are being shut out of the banking system at the most inopportune time — just as they are trying to become financially independent.

Lauren Pollick, 28, who has a master’s degree in criminal justice, said her inability to obtain a bank account because of her inclusion on ChexSystems set her back just as she was seeking financial independence. For about a year, she paid her gym membership and her cellphone bill on prepaid cards — or “devil cards,” as she calls them, because of the high fees.

At the time, Ms. Pollick, who now has a banking account, tried to hide that she was unbanked from her colleagues at the Doe Fund, a group in New York that helps former prisoners and homeless people.

“How are you supposed to get stability in your life with these barriers?” she asked.