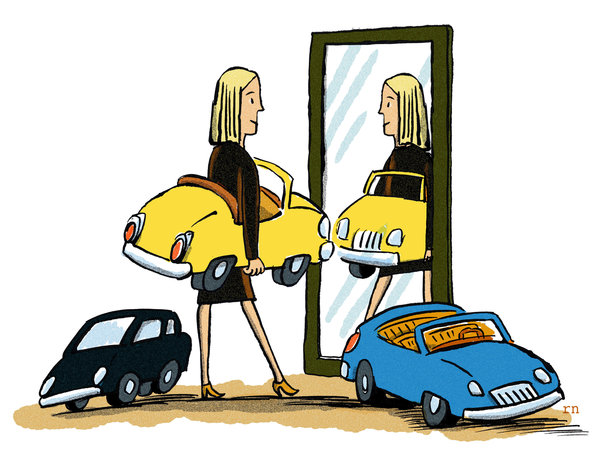 When you can drive a car off the lot with that new car smell for a mere $199- or $299-a month-lease, many consumers can’t help asking: How can I afford not to take this deal?

After all, if your family is already paying for cable television and a couple of cellphones, many of the current leases being offered may seem like a relative steal. And with leases fueling surprisingly strong car sales, it seems that more drivers are thinking in those terms.

Indeed, the pay-as-you-go smartphone mentality seems to have seeped into the car market, especially with younger buyers, many of whom don’t seem to mind that they don’t own anything at the end of the lease’s term. But that hasn’t changed the long-term economics of leasing: it still costs several thousand dollars more than buying a new car, not to mention a newish used car.

“People’s attitudes are shifting,” said Philip Reed, senior consumer advice editor at Edmunds.com. “The car is being seen more as a commodity to be used and then returned. Ownership was a big part of the World War II generation — people wanted to own their house and own their car. They were taught that was financially responsible.”

There are reasons certain people might want to lease (the first one being you have extra money to burn). But for the rest of us, the financial consequences are worth re-examining, especially when you have a slew of competing financial priorities like college tuition, retirement or even a nice vacation.

So let’s start with the hard numbers. Mr. Reed looked at three ways you could acquire a four-door Honda Accord EX: buying a new 2014 model, leasing the same 2014 car, or buying a used 2011 Accord with 36,000 miles. (Many people in the New York area are paying about $28,211 for the new car, including tax, title and registration.)

The analysis looked at the cost over six years, since the average person owns a car for that long, and it incorporated typical buying patterns: the new Accord is purchased with a five-year loan, the used car is financed with a four-year loan, and the person who is leasing must take out two consecutive 36-month leases. (The rest of the assumptions are detailed on the accompanying chart.)

Leasing initially seems to be the cheapest route when you look at total out-of-pocket expenses: It costs $5,244 less than buying new. (Buying a used car is still the most economical. You save $5,277 compared with leasing, and it’s about a whopping $10,500 less than buying new.)

But when you account for the teensy fact that you don’t own anything at the end of those six years, the calculus changes. If you had bought the car new, it would still be worth about $11,000, according to Edmunds.com’s calculators. The used Accord would be worth around $5,000.

“If you asked me what is the most expensive way to get a car, the answer would be: You only want to own it during its period of greatest depreciation and then move to another new vehicle,” said Jeff Bartlett, deputy automotive editor at Consumer Reports. “Well, that’s what leasing is.”

With that analysis in mind, here are some other factors that need to be considered when deciding the best way to acquire a car:

NEEDS VERSUS WANTS Is there anything you absolutely need now that you can’t get in a lightly used car that’s only a few years old? Some experts say you can make a decent argument for new cars based on some recent safety improvements. The Insurance Institute for Highway Safety, which some experts say tends to have more rigorous guidelines than the government, added new recommendations after its latest small frontal crash tests last summer. And some manufacturers have been updating their existing models, Mr. Bartlett said, to meet those standards.

Though it’s hard to argue that anyone “needs” to have the latest technology, that has come a long way in the last couple of years, too. “That two- to three-year time difference means the world in terms of connectivity,” Mr. Bartlett added. “Now, there are stereos in mainstream cars that offer Pandora, Aha, and Stitcher for streaming Internet radio via a smartphone and allow you to control an iPod. Plus, USB connections are fast replacing traditional microplugs, and Bluetooth is near ubiquitous. The expectation of mobile connectivity and what you can do on the run has changed dramatically.”

LEASING It becomes a difficult cycle to escape. Unless you saved extra money while leasing, you may not have accumulated enough for a down payment on your next car, and you won’t have a car to trade in. And now that you’re accustomed to the low monthly payment, it will be hard to stomach the much higher monthly cost of buying new (or even a not-too-old used car, in some cases).

You will avoid repair or maintenance costs (except for oil changes and tire rotation) that used and even new car buyers would eventually have to pay. But you will probably pay more for insurance with a leased vehicle, which Mr. Reed says is almost as much as the extra maintenance. It ends up being close to a wash.

Leasing also allows you to get into a car right away, with little financial disruption: it requires little or no money down and minimal outlay each month. There’s also the fact that you’re driving a brand-new car, with all of the latest technological and safety features.

TIME HORIZON Beyond the numbers, your time horizon should also help determine what you ultimately decide. “If you are someone who knows they are going to own a car for 10 years and you are driving all over the country, you are not the type of person who should be leasing,” said Alec Gutierrez, a senior market analyst of automotive insights at Kelley Blue Book, referring to the mileage limits of about 12,000 a year on leased vehicles. “If you go beyond that, you are likely to be hit with significant penalties.”

Besides, buying a new car and holding onto it is more economical now. “You are making pretty high payments for about four or five years, but the dependability of cars is really great these days,” said Mr. Reed. “It can probably go another five years with minimal costs.”

LEASE MECHANICS You’re essentially paying for the amount of value the car loses over the course of your lease; in other words, the price you pay is based on the vehicle’s residual value at the end of the term. Consider a $30,000 car that is worth $15,000 after three years. “You will divide that into monthly payments, and that is your lease payment, plus interest and some fees,” Mr. Reed explained. (You also only pay sales tax on the amount of the vehicle that you use, in this case, $15,000).

That’s why cars that retain their value tend to translate into better deals for leasing: the higher the residual value, the lower the monthly payment. “Things like Mercedes, BMW and Honda hold their value very well, and make very good lease cars,” Mr. Reed said.

(If you do lease, figure out the number of miles you want to drive each year; how long a lease you want; and how much you want to put down. Then call a few different dealers and ask them to quote you a monthly payment. This is the simplest way to shop around, Mr. Reed said, though leasing aficionados may choose to get more technical.)

BUYING USED If you buy used, you may need to come up with a larger down payment than if you bought new since more people tend to default on used cars (you might have to put 10 to 20 percent down on a used car, compared with 0 to 10 percent for a new one). “But because of the easily repossessed nature of the collateral, if there is one loan that is easier to qualify for, it tends to be a car loan,” said Greg McBride, senior financial analyst at Bankrate.com.

PAYING CASH Of course, there’s always the option of paying for a car the old-fashioned way: saving up and paying cash.

That’s what Mr. Bartlett of Consumer Reports does, whether he is buying new or used.

“Obviously, nobody does this,” he said. But when you pay cash, “you don’t have to worry about them sneaking in all of these fees. You just negotiate a price, and then write a check for that number. If I can put some of it on my credit card and then get the points and pay it off at the end of the month, I come out ahead.”