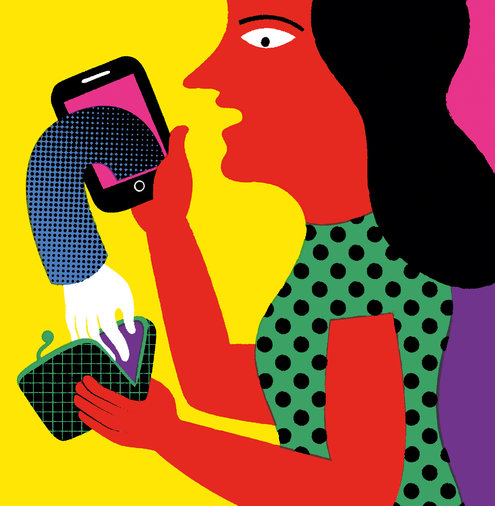 NOBODY likes debt collectors. But a great many of us have to deal with them. A recent study by the Urban Institute found that roughly one-third of all Americans have a debt in collections reported on their credit file. For many debtors, that means being called, hounded and even threatened on a regular basis. But what’s it like to be the collector?

According to the Bureau of Labor Statistics, there are roughly 369,000 bill and account collectors in America, and that number is projected to grow. There is a perverse logic at play here. In a stagnant economy, we can barely pay our debts, but we can still pay people to collect on them.

For the past two years, I have been working on a book on the debt collection industry and, as part of my research, I spent time at a small agency in Bangor, ME, owned by Brandon Wilson. His collectors tend to be young men, often with troubled pasts. One of them told me, “I had a drug habit, and the only way to support a drug habit is to deal. No one [else] would hire me because of my record.”

The first step in collecting, Mr. Wilson told me, is finding the debtor. When creditors can’t collect on unpaid accounts, they often sell them for pennies on the dollar to third-party debt collectors. The seller hands over spreadsheets containing bits of information on debtors. But frequently, those bits are outdated or inaccurate. So collectors have to play detective, searching databases, calling neighbors and contacting family members. The best possible scenario, Mr. Wilson said, is to find a debtor’s scornful ex-spouse: “They’ll tell you, ‘Here is his number, here is his mother’s number, here is his slutty girlfriend’s number.’ We will usually put it on mute and say, ‘We got a rat — we got a rat!’ ”

Once you find debtors, the second step is convincing them to pay.

Mr. Wilson insisted that I try it. I wasn’t keen on the prospect of hounding poor people over the telephone. But one collector persuaded me. “It’s the only way you’ll really understand what it’s like,” he said.

“We will give you a pseudonym, like Mark Twain,” Mr. Wilson promised.

After consenting to a confidentiality agreement, I put on a headset and logged on to the computer system. On this particular day, the office was using an auto-dialer to call debtors whose contact information had already been verified. On one of my first calls, I connected with a woman who owed money on an old cellphone bill.

“I’m calling because I’m trying to follow up on a loan that we had on record for you guys, and I’m wondering whether there’s any way we can set up a payment plan for you,” I told her. As soon as I said it, I knew it was weak. I wouldn’t pay me, if I were her. I tried to recover: “The balance was at $1,441, which I know is a lot — there’s a bunch of fees and interest — but we’re able to…” Mr. Wilson, who was listening in, whispered, “Nine hundred dollars.”

“I’m not working right now,” the debtor told me.

“We talk to a lot of folks who are in kind of a similar spot,” I told her. “One thing that we can work out is a hardship payment plan, where it’s just $50 a month.” The woman told me that she could probably pay me in the middle of the month. She stayed on the line for a few more minutes until, rather abruptly, she hung up.

Mr. Wilson launched into his postgame commentary. “You should have given her our address and made her promise to send the check on the 15th.” This way, “when you call her back, you say, ‘You promised to pay and you didn’t.’ ”

Moments later, I was speaking with another woman, who owed several thousand dollars on her credit card. I suggested a payment plan. “I’m not going to be able to do any of this,” she told me. “I was just answering out of, uh, what would you call it? You know, good manners.”

“I really appreciate it,” I told her.

“I’m not a deadbeat — it kind of sounds like I am — but I just got ill, and that was a long time ago, and I’m barely staying afloat.” She explained that she was bipolar. “I wasn’t able to pay other bills either, and then I had no credit.” She told me that she had managed her condition “pretty well,” but added, “I know that I’m getting close to losing it, which would mean going to a hospital and, you know, a recovery period.” Her voice sounded shaky. I forced myself to press on.

“Is there any way that you could even set up a modest payment to help pay this off?” I asked.

I looked back sheepishly at Mr. Wilson.

“You know what you should have said? You should have said: ‘I understand that these are tough times, and you have been through some hardships, but I got 90-year-old ladies on oxygen who are sending $25 a month, as a show of good faith. So certainly there is something you can do to start paying off this debt.’ ”

It was hard to imagine doing this work full time. On average, bill and account collectors in the United States make $16.66 an hour. Many are in debt themselves. The owner of one agency told me that, quite by chance, he occasionally bought debts that belonged to his own employees. “I call the collector into my office and tell him that he had to start paying me $20 a month,” the owner said. I visited one collection agency, on the impoverished East Side of Buffalo, N.Y., where the employees were paid entirely on commission. One payday, I witnessed two dejected, middle-aged men getting paid for the week: One earned $115 and the other just $88.

Inevitably, this induces some collectors to up the ante from persuasion to harassment. According to the Federal Trade Commission, the combined number of complaints about threats of violence and “false threats of arrest or seizure of property” from debt collectors more than tripled between 2008 and 2012. It’s tempting to blame the collectors — and certainly some deserve it — but the problem is broader.

The big banks and other creditors are unloading their unpaid accounts, from their most destitute customers, and selling them on the cheap to debt buyers who, in turn, push their collectors to recoup every last cent. At the corporate level, this can be very profitable. Encore Capital Group, a behemoth in the industry, has seen its revenues soar to $773 million in 2013 from $316 million in 2009. In general, collectors themselves see little of this. Make no mistake about it: This is a battle for scraps. It is middle-class and poor people, being pitted against even poorer people, to the benefit of much richer people.

In an attempt to clean up the industry, the Consumer Financial Protection Bureau is now policing about 175 of the nation’s largest agencies, but according to a recent industry estimate there are 9,677 agencies operating in the country, and roughly 42 percent are small shops with four or fewer employees. The worst actors are often small outfits, which can, if necessary, shut down and open back up, in another place and under another name. In theory, the bureau could go after them, but it doesn’t have the resources to do this on a large scale. This is bad news for consumers, of course, but it’s also bad news for law-abiding collectors because it reinforces the perception that they are ruthless scofflaws.

It didn’t take me long to realize that I was a terrible collector. I lacked an easy rapport with the debtors and an innate sense of when to segue from courtship to the unpleasant matter of collecting. Most of all, I lacked something more visceral: the drive and the hunger to make my bonus. I was a comfortable upper-middle-class guy with a house, two cars, and a wife working as a doctor. I knew that if circumstances were different, if I were poorer and worried about my family, then somehow or another I would find a way to collect.